MOVIE: THE DEAD NEXT DOOR By Kristian Rodriguez 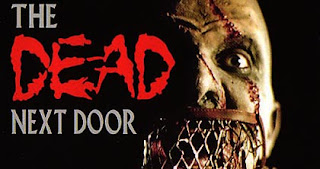 One of the last movies to be filmed on super 8 hand held technology the Dead Next Door is a zombie gorefest which gives thrills from start to finish. Secretly produced by Evil dead series horror legend Sam Raimi and directed by a young JR Bookwalter, Dead Next Door is a cult classic that any zombie fan NEEDS in their dvd collection.
The story is set in Akron Ohio and the world has been taken over by flesh eating zombies (which don't run and cannot be killed i might add) and society is on the brink of collapse. The law enforcement agency has developed a new type of SWAT team to combat the zombie scum in the form of the Zombie Squad who drive round in a cool hearse that looks like a cop car and are also armed up to the eyeballs. The zombie Squad are led by a character named Raimi (who is voice dubbed over by Evil Dead's Bruce Cambell!!) and they go out kicking zombie ass, looking for survivors and a serum combat the virus by the man who created it. Sent by Doctor Savani (yes named in tribute to Dawn of the Dead's Tom Savini) to find the serum the zombie squad end up locking horns with a religious cult who protect the zombies and feed them. Will they get the serum and end this nightmare?
This movie is an all time favorite of mine! If you love low budget zombie movies covered in gore and satire then this is for you. Highlights for me are scenes like when a zombie walks into a video store and returns a Dawn of the Dead tape, a recently decapitated head digests a finger, zombies on leads like dogs, protesters for zombie rights, Bruce Cambell's cameo voice over, zombies outside the white house and the great special effects throughout.
Sam Raimi gave these young film makers the money for this and they ran with it producing one of the best splatter-fest's which checked all the boxes as far as I'm concerned with B movie nastiness.
Here's the trailer