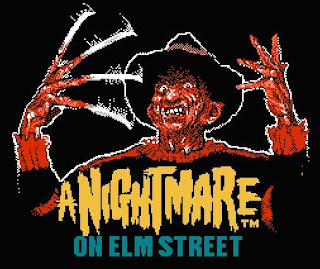 For a lot of people the Nintendo Entertainment System (NES) was the No.1 console from back in the day but for me however I prefer the Sega Genesis/Super Nintendo years. Reason being the games were better and you didnt want to kick the fuck out of your TV due to the games being covered in glitches and being harder than a truck load of Viagra. That being said owning an Atari 2600 was an even more painful experience! even having the thing passed down to me was traumatic enough and I cant imagine how heart breaking it must have been to receive shit games like that as main Christmas presents back in the 70s.
OK so its the late 1980's Nintendo are scoring big on sales, Freddy Krueger is slicing up the box office with sequel year after year and the public are still thirsty for more. So thirsty in fact the marketing team for Freddy Krueger has produced Freddy Dolls, Freddy comics, Freddy Christmas decorations, Freddy Halloween outfits, his own TV show seires called Freddy's Nightmares, Freddy water pistols, an awful Freddy board game, Freddy zippo lighters, Freddy Gloves and now a Freddy Nintendo game. 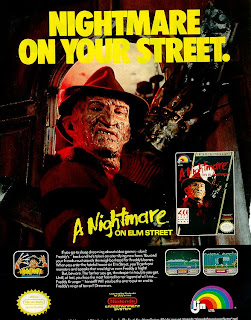 Created by LJN (who have a bad reputation when it comes to NES games) Nightmare on Elm Street is a side scrolling platform game which makes next to no sense. Ok so lets look at the cartridge and box art 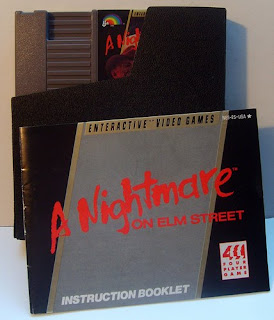 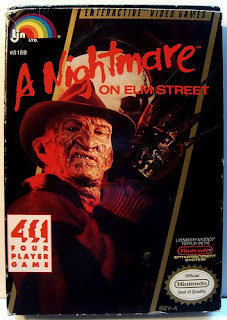 Looks promising so far eh... well never judge a game by its cover that's what i say when a cover like this 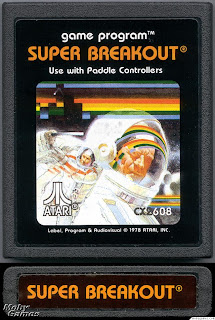 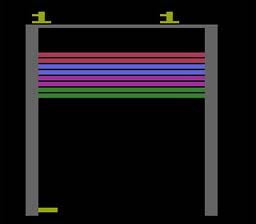 Anyways back to the Freddy game and away from the Atari bashing. The story line of the game is to go round collecting Freddy's bones so you can destroy them and put the Elm Street villain to rest once and for all. So the storyline is taken from the 3rd installment of the franchise (and one of the best films in mine and many other peoples opinion) where the exact same has to be done to kill Freddy Krueger.
The game is a side scrolling adventure and you can have up to four players which is rare for a Nintendo game. The game has a bar at the top which is a sleep meter which decreases as you play the game. When the sleep meter runs out the enemies turn into even dumber forms then they already were and Freddy randomly appears and attacks you now and again. 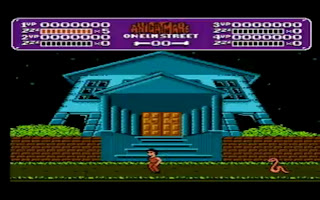 Now as I just mentioned the enemies are just stupid...no let me re-phrase that the enemies are fucking retarded! They have nothing to do with the movies what so ever and range from, bats, snakes, falling rocks, spiders, Frankenstein's monster, ghosts, rats and of course the shitty designed levels which will make your blood boil. So you have to go from house to house and find all the bones and then you get to fight a level boss... 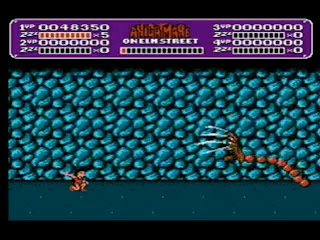 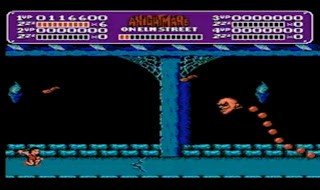 The second boss is another set of anal beads with Freddy's head attached which from what I can gather fires tongues at you. Funny I don't recollect a scene in any of the movies where someone died from being eaten out multiple times by Freddy Krueger? Hell I probably would pay to see it as I was dumb enough to buy this fucking game in the first place and a ticket to see Terminator 3.
Actually looking back there was a scene in nightmare number 3 where he turns into some hot nurse bitch who fires tongues at some mute fucker and makes his bed turn into the fires from hell so my bad! The boss after this one is a glove that jumps around the screen without the restrictions of beaded sex toys. 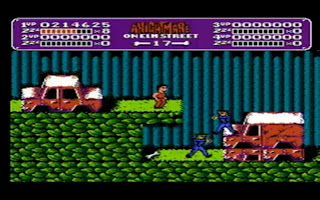 Next up a level set in a scrap yard full of fucking Frankenstein's which is fucking retarded! This game is fucking so difficult by the way it takes the piss... and did I mention its retarded? 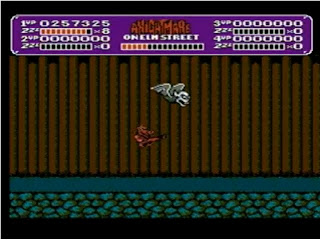 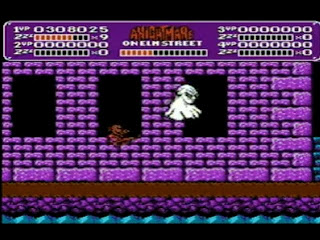 So looks like our next boss is a ghost or Freddy Krueger has joined the Ku Klux Klan in order to make everyone think he is even more of a cunt then he was before! Or maybe someones wanked all over him who the fuck knows...by this point I am losing the will to live.
Whats the point in making a video game about a movie franchise and then adding bosses and characters that have fuck all to do with it? Maybe in other LJN games they might have Freddy Kruegers running around. It would make about as much sense! 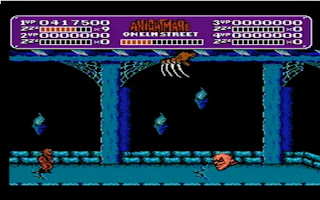 Next boss Freddy returns at long last...well parts of him. We've had the glove and we've had the licky licky head now lets have both! What next his fucking balls and one of his legs? 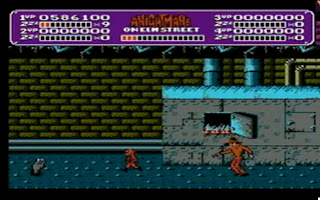 Okay so its the last level (thank god!) and its the school. You have have to get to the boiler room and fight against Freddy and this time its for real and there are no anal beads, flying death heads and KKK members to contend with. So after kicking his ass you throw the bones in the furnace and send Freddy back to hell. Now for the ending scene...which before I continue I must let you know that this game is so fucking hard its a joke and it took me from 1991 to 2003 to finally finish this game and here was my reward... 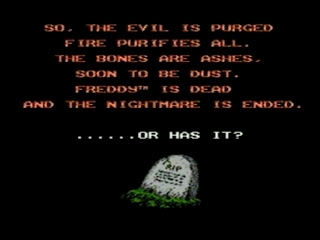