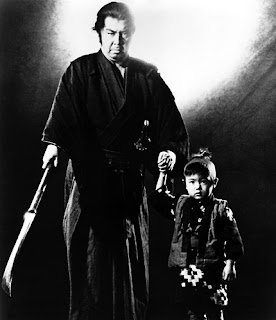 Banned in 1980 under the video nasty act Shogun Assassin was locked away in the vaults for almost 20 years before being released in the late 1990s. Unlike many of the video nasty's which were banned in the early 1980s Shogun assassin had something different about...it was a decent film. Not to discredit the other films which were banned but on a whole about 90% of the banned films where absolute dog shit just made for shock value adding more gore than sense.
Shogun Assassin however needed to be this violent to tell the tale of a violent time in ancient Japan. The film is the tale of Lone wolf a man who defies a powerful shogun who is an extremly powerful warrior and tyrant in these ancient times. The shogun see's lone wolf as a powerful threat towards his interests and tries many times to have lone wolf killed. Now the shogun character in this film is an awesome creation long white hair and white beard to match with an evil stare almost like an evil japanese merlin make him very a sinister and elusive nemesis for the main character. He kinda reminds me of Shang Tsung the boss from the orignal mortal kombat game from 93.
Anyway the shogun sends a team of ninjas to kill lone wolf in his home while his wife and small baby cub are still in the house. However the ninjas spot lone wolf praying and murder his wife leaving just lone wolf and his infant child. Vowing revenge lone wolf takes out many of the shoguns men which then makes the shogun cut a deal with lone wolf, the deal being if lone wolf can defeat the shoguns son in battle his life will be spared.
Lone wolf wins this duel in one of the most stylish way (which im not going to spoil) and defeats the shoguns son. Shogun spares lone wolf but not his son and from then on is forever sending assassins and ninjas to kill the infant child. Lone wolf makes the child a warrior as well and vows to kil the shogun. And this is the story of the film and the next four sequals which follow. Now I dont want to go any further into it because you have to see it for your self but this movie is AWESOME! with some amazing enemies like a gang of deadly geisha girls, many many wicker hat wearing warriors and ultimately the masters of death which are three bad ass wicker hat wearing nutters! Here's the trailer im trying to obtain the sequels at the moment