Crime fighters is a side scrolling beat em up from 1989 made by Konami. Using the same formula as Double Dragon and Streets of Rage, Crime Fighters was a welcome addition to the genre with its ultra violent moves and colorful characters. The story of the game is some mother fucker has kidnapped loads of bitches so you have to get the train into town and kick every ones head in! With all sorts of melee weapons available, the ability to kick peoples heads in as they lay on the floor and also kick them in the nuts till they writhe on the floor in agony really made you feel your £1 was well spent. However the game is so fucking hard on one player that a pound didn't get you very far in some arcades which then with no credits left you felt the urge to start kicking people in the nuts for real to make your self feel better after being duped by greedy arcade owners from the 1990s. The enemies on the game are the standard punks and drop outs that you would normally see in a beat em up but the bosses are a bit more special. Each boss has a different strategy and you need to repeat a cunning violent plan to beat them for instance the first boss is a mow-hawk punk with a chain he keeps spinning and you have to wait for him to pause with exhaustion before you make your move. A nice little touch this game has is that they have included bosses which rip off 80s horror flicks which means Freddy Krueger and Jason Voorhees are included as bosses. 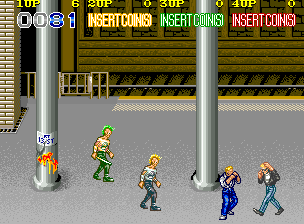 Overall this game was a blast to play on coin ops when I was a kid and it kept me happy many days during summer holidays abroad in the hotel arcades. Almost every time a found this game it was always twinned with Mortal Kombat 1 on a 2 on 1 cabinet. You can download this game on emulator online it should be under the mame system. The engine for this game was revived for Konamis excellent Teenage Mutant Ninja Turtle beat em ups for coin op and consoles a few years later. Check back in the next few weeks and there may be more updates when I think of anything else I feel like sharing with the world. CLICK THE VIDEO BELOW TO WATCH THIS GAME IN ACTION
Kristian Rodriguez 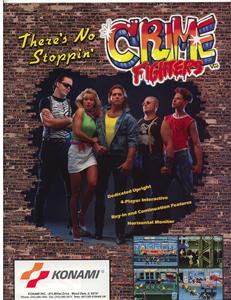