According to South Park the Simpsons have made an episode about basically everything. Well remember that time when Maggie was kidnapped by a pedophile ring and the family had to beat up everyone involved?.... Well no they didnt make such an episode but they made a beat em up arcade game in 1991 which has a pretty similar plot! 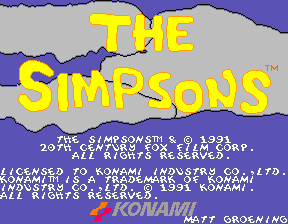 While I'm on the subject doesent Maggie rhyme with Maddie? hell maybe the Mccans should take a leaf out of the Simpsons book and start whooping some ass instead of bitching in the papers! Anyways the plot of the game is Smithers (yes man of Mr. Burns the power-plant owner and Homers boss) has stolen Maggie because she caught hold of a diamond during a failed jewel heist. Ok he must be a nonce because why not just take the diamond off the baby and then leave her in a bin or something? why kidnap her as well? So there's our plot now Homer, Marge, Lisa and Bart must take to the streets of Springfield and beat their way to their child. 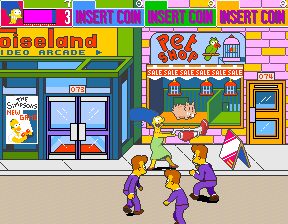 The game was developed by Konami (who made crime fighters in my last review) and is a four player which only uses two buttons for each player. This game is best enjoyed with four players as it does get a tad harder when more enemies are on the screen and it looks better having the whole Simpsons family battling it out. 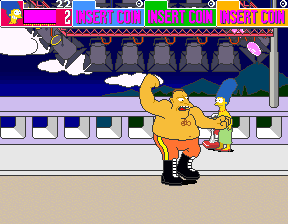 The game has a few different levels to go through same amount as any arcade beat em up really. These include Krustys theme park, Moe's tavern, downtown Springfield, a grave yard, the woods, a dream world and finally Springfield power plant for the boss stage. 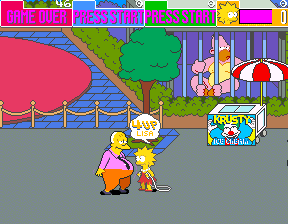 Most of the enemies in the game look like pedophiles wearing pink shirts and suits so its really fun to bash there heads in. Other enemies and bosses include a giant bowling ball, a giant Krusty balloon, a wrestler, a bear, a suicide bombing Smithers (who has a flasher jacket full of explosives) and finally Mr Burns in some giant robot suit. 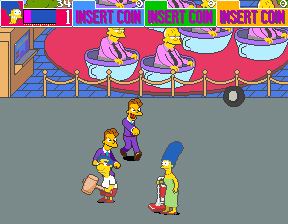 The games visuals are pretty good for its time and there is quite a lot of voice recorded content in the sound effects which was always a plus for any game back then. Playing this game as a kid was always a thrill and yet you did get value for your credits but completing the game without at least paying a tenners worth of pound coins would be a nightmare of a challenge. 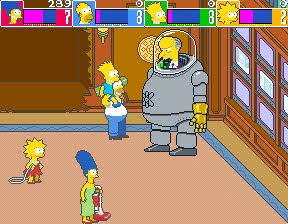 This game is the best Simpsons game ever made but when you look at the franchise's games on a whole that doesn't say much as every other Simpsons game released sucked! From Barts nightmare to the Simpsons wrestling this one is the only one worth playing. 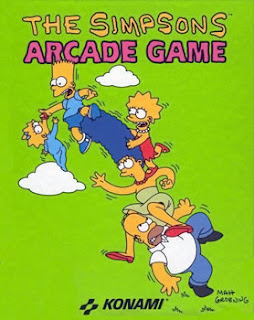