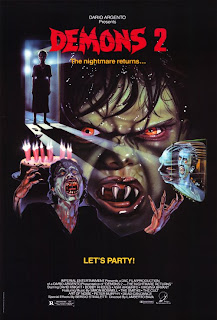 Ok so I'm doing more posts mainly out of boredom and the fact I'm going through my horror collection. I have got all the classics in my collection the freddies, the jasons, the michael myers, the stephen king movie adaptions, romeros zombie movies and all the other standard greats you would find in your local video stores horror section. (On a quick note I did buy out the stock of the local video store when it went bust a few years back) But I want to share with you the movies I really enjoy that you probably have never seen or heard of and Demons 2 is likely to be one of those. Demons 2 is a sequal to the Euro horror movie Demons (well duh!) which was directed by Lamberto Bava and produced by Dario Argento (Dawn of the Dead). In the first movie a bunch of cinema goers get locked in a movie theater and the movie comes to life turning the viewers into demons with claws and fangs which infect everyone and everyone gets fucked up to put it mildly. 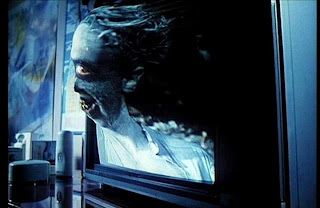 In this movie its some girl called Sally's 16th birthday and she just so happens to live in a futuristic block of flats that when the power is out no one can escape the building and the windows are bullet/ sound proof... how convienient! Anyway Sally is watching a movie about demons on the tv in her room while all the guests are arriving and a demon just decides to jump out of the tv and infect her. Sally comes out later to blow out the candles on her cake and then metamorphises into a demon in which is a really cool 1980s special effects fest with sprouting teeth and claws. Within minutes she rips everyone in the party apart and then everyone else grows teeth fangs and the lust for human flesh. I must note as well while this is going on a really cool song by the cult is playing. Toxic demon blood soaks through the floors into the apartments below knocking out the power cables and infecting who ever it touches (including a dog and a young boy) leaving the remaining survivors locked in the futuristic tower block with hordes of demonic bastards. 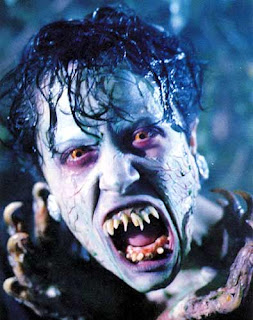 I really dig the make up and special effects in this one! 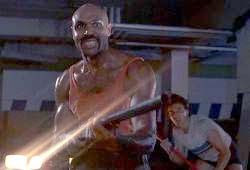 (which has the black guy from the first movie who is also if I'm not mistaken the lead singer of hot chocolate!)
and they fuck up everything in their path. The two main survivors the movie focuses on are some yuppie hero type called george and his pregnant wife and the rest of the movie is about their survival and escaping the hell which surrounds them. 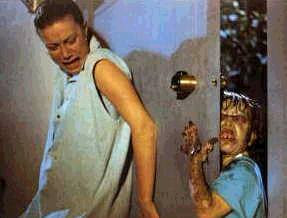 For me I love this movie it isnt the best horror movie around but if you like cool gory special effects, 80's horror movies, new wave music or just stupid storylines with ridiculous violence (including people getting slammed in sunbeds, stabbed with umbrellas, castration and people getting clawed to death) and you like movies that are just fun then check this out!
Posted by Kris Rodriguez