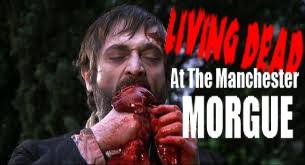 The Living Dead at The Manchester Morgue is a film I have been meaning to watch for sometime. For some reason it has been hard to get hold of and very over priced for a long time for some reason (maybe due to the fact it is also known as let sleeping corpses lie) but I'm not gunna pay £20 for a film I've never seen before incase its shit! I managed to find it online via google video (i have posted the link below) and I wasnt dissapointed. 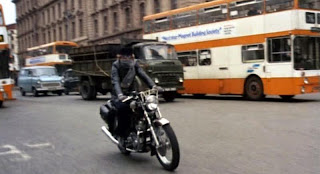 The film starts out when a hip bearded antique shop owning biker goes on a road trip from the busy city to the lake district. On his way he encounters a wallflower ginger female who backs into his motorbike at a petrol garage and renders it useless. The biker (George) gets the woman driver (Edna) to give him a lift to where he is going as its the least she can do. The two get lost in the countryside and while George is off getting directions from a group of men in a field (who work for the department of agriculture and have a big fuck off radiation machine for killing ants) Edna is attacked by a zombie tramp who tries getting in the car. George comes back the tramp is gone and its not long before the zombie tramp kills someone and they get framed for it, a policeman with a really fucked up accent comes after them thinking they are satanic killers, babies start biting people, zombies start turning up ripping people to pieces and the two main characters are slap bang in the middle. 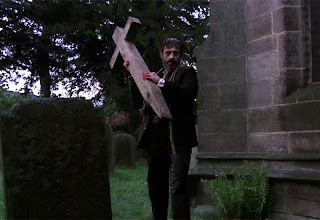 The movie is awesome and really captures the feel of the decade it was filmed in. The use of the British countryside gives this film the same eerie quality of romeros first undead nightmare (NIGHT OF THE LIVING DEAD) which is awesome and old school locations like church crypts and graveyards make it that little bit cooler. The zombies themselves are that tiny bit more terryfying than the usual undead which grace our screens on a regular basis. They cant die from headshots and just keep coming and are freakishly strong and in one scene a zombie lifts a gravestone out of the ground and uses it as a weapon. Theres lots of drug use including a character who is addicted to heroin and the gore count is tip top and much more hardcore than anything else released at its time. Anyway I never like to spoil films in my reviews but I love this movie please check it out the full version is below! 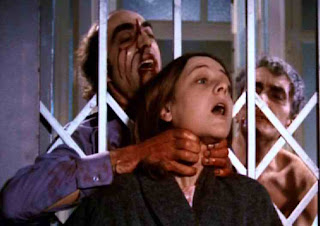