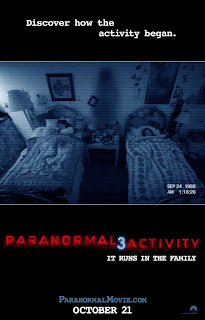 Normally I dont do this and I normally write about things I enjoy and would like to share with you so that you can enjoy the same things as I do. However after just watching this movie I have never felt the need to say "DONT WATCH THIS PILE OF CUNT" more than now.

After seeing the trailer this summer in the cinema I was looking forward to this! I really enjoyed the first movie and really enjoyed the way it pulled on the tracks of the emotional roller coaster in the same way Jaws does by having an antagonist that you never see coming until the last second. I thought the first movie was innovative and believable in the sense that with todays technology if there was a ghost in your house you would try and document it.I enjoyed the characters the effects and the atmosphere. I never cared much for the theatrical ending but oh well.

I sat through the second movie after being told it was the worst film ever. To be fair the people that told it was the worst film ever I value their opinion about as much as I value the rest of the united kingdoms general public opinions on things which is zero.
The second is watchable if you fancy a few scares and adds a tiny bit of depth to the story of the original but all in all its a cash in and doesent hold a candle to the first.

Now onto the third which is actually the shittest film I have seen this year. All of the decent footage we have seen in the trailer is non existent in the actual movie which makes you feel after watching it if you saw the right movie. There is no continuation of the baby kidnap cliffhanger from the last one and just soo many pot holes its easy to pick this fucker apart its hard where to even begin.

This movie is a dumbass prequel which isnt even necessary. Its set in 1988 and is about the two sisters during their childhood and surprise sur-fucking-prise their step dad (or maybe hes just some bloke who hangs round in the basement and bangs their mum?) only happens to a junior paranormal investigator who has loads of cameras and editing equipment just like every other male lead in this series!

So yeah things start happening furniture moves about, loud bangs, baby sitter gets freaked out, couple of cheap scares all are now on tape. The movie makes a nod towards Poltergeist as the mum and dennis (I think that was his name I dont really give a cunt if I am wrong!!) smoke a doobie in the bed. This time round the ghost can cause earthquakes to the point where everyone has to leave and go Grandmas house.

Only thing is Grandma turns out to be some witch bitch who has weird old ladies in her shed, mum levitates and flies around the house, Dennis gets snapped in half by the ghost (which is fucking jokes) then the kids follow nanny up stairs and the movie cuts off.

For this being the "prequel" there is nothing mentioned of any of these events in the other movies apart from the fact they were haunted back in the day. No mention of bent in half dudes or crazy grandma! The only thing that is mentioned in the other movies is that there was a fire which doesent even happen in this movie so they fucked up there again.

The first movie is awesome, the second is watchable and the third is soo fucking shit you want to tune out ten minutes in. How I survived the whole thing I do not know. Please do your self a favor and dont bother buying renting or even watching this. I give all movies a chance and I enjoy shit films as I like to make jokes the whole way through them but this is just dire shit! The most shocking thing is this movie made over 80 million!! So I'm sure the producers couldnt give a fuck. What a finger to give the audience!
Posted by Kris Rodriguez