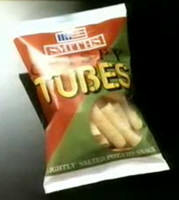 Back in the 1980's and early 1990's junk food was rife and times were good. There was no Jamie Oliver policing kids pack lunches, no one was being all pussy about e numbers and the only things that people thought were deadly were smoking fags and being hit by buses.

During this golden age of Marathon Bars, Monster Munch and when Space Raiders had the amazing comic book packaging (which looked like a transvestite David Bowie having a space quest) there were Smiths Tubes.

Smiths Tubes came in two flavors which were ready salted and salt and vinegar. They were kind of like longer versions of Hula Hoops but not as hard and had the same texture as the Smiths Squares crisps.

Tubes were awesome and when Pepsico bought out Smiths and eventually Walkers, the Tubes sadly never survived the transaction which was a shame. The bacon flavored Monster Munch were also whacked and so were the Beef ones until a few years ago. 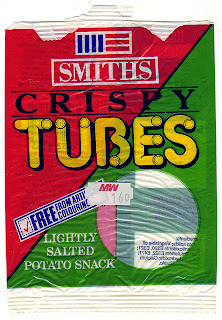 All that remains of the Smiths Tubes is this scanned empty packet. RIP!
Posted by Kris Rodriguez