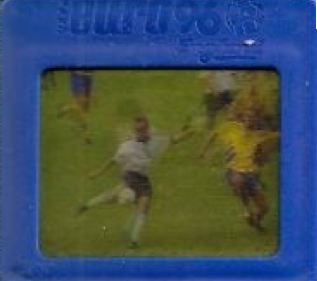 1996 Was a great year and the Euro 96 competition held in England 30 years after they won the World Cup was one of the biggest things about it. Elsewhere Oasis were conquering the world, the Spice Girls where going viral and aliens were blowing up the White House but Euro 96 was my fondest part of that year.

It was meant to be! we had the best squad since Italia 90, Frank Skinner gave as great anthem to blast out and we was at home how could we lose? Well when you put a stupid little fuck muppet called Gareth Southgate in the mix then thats all it takes to turn any dream into a full on nightmare.

Even though we went out it was still an amazing time to be a football fan and I have never felt the same sense of passion for our national side ever since. You could argue and say France 98 but we all knew deep down we would never have won that but Euro 96 we had a good fighting chance.

During all the football festivities the marketing went mad. Everywhere was England this England that and some brilliant products emerged. The Corrinthian mini football players were all the rage and were going through the roof but another toy came out which everyone was swapping at school and this toy came free in a cereal box. This toy was the mini Virtual Euro 96 monitor take a look

These were motion activated bits of card in a frame that did a one second animation of a football player.. playing football. There were a few to collect and I remember having them all. I was keen into Subeteo at the time but I didnt play the game (as it was not that fun) but I enjoyed building the stadium with all the accessories and these monitors served as big screen monitors for my football ground. If I remember correctly there was a riot and the stadium caught fire around 1997 when I was bored one day and found a can of Lynx and some matches.

If you sent off a thing to Kelloggs they would send you a massive collectors kit to put all your screens in. I never had this and I lost all of mine years ago. Does anyone still have theirs? 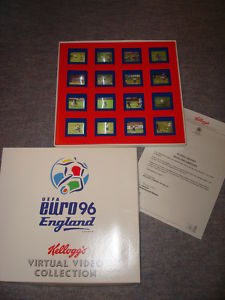