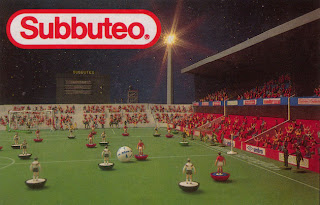 Long before FIFA was any good Subbuteo was the closest thing you could get to playing a fictional game of football at home.

The game it self did not play as well as expected though and it did seem a bit stupid that the ball was bigger than the football players. I did not care though as I scrapped the rule book and played by my own set of rules which made it actually playable.

The thing I loved most about Subbutio was the accessories you could buy just about everything from camera men, referees, lines man, giant score boards, a commentators tower and the stadium stands.

It was an expensive hobby and the stadium I built was 75% custom made as to build the stadium and fill it to full capacity cost an absolute fortune.

As I stated in previous article my stadium unfortunately burned to the ground after fans of the Red Team were somewhat upset about the referees decision to disallow a goal so they rioted and the rest history.. well melted plastic but the shocking scenes still live with me to this day. Its such a shame when the beautiful game turns ugly when these hooligans cant behave them selves and spoil the fun for everyone else.

Anyway I had a look online today and check out these great efforts that other people have done with their Subbutio stadiums. 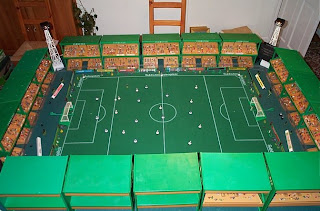 This was the old school one I dreamed of having. Its a good job I did not get it after the incident with my custom one. 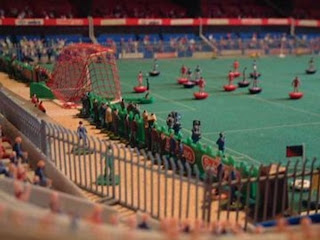 Look at the little fences keeping the little nutters from doing a pitch invasion! Something I should have thought of! 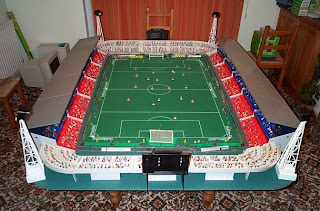 This is a new school pitch apparently it looks pretty awesome. 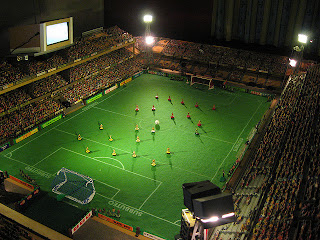 This one here is by far the best effort I have ever seen!
Posted by Kris Rodriguez