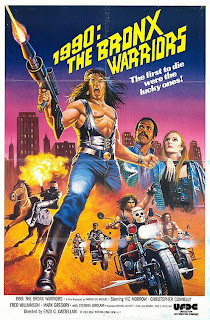 So this past weekend I stayed home and chilled on Saturday night (which is pretty weird for me) with a 20" inch pizza and the trashiest movies I could get my hands on.

It was then that I discovered maybe one of the trashiest movies I had ever seen and to top it off the main hero of the movie was even called Trash. The movie was called 1990 The Bronx Warriors and was made in 1982 by Italian film maker Enzo G Castellari who also brought us the original Inglorious Baterds andThe New Barbarians another B movie classic.

The movie is set in a post apocalyptic New York in the year 1990... now its not the first time that this mistake has been made where movies predict the end of the world way to near to the actual movies release date. Escape from New York was set in like 1988, Demolition Man made cryogenically freezing criminals possible in 1996 and Back to the Future 2 was set in 2015.. mind you I will let them off for that as there is a shit 80's bar down the road from me and I recently saw a 3d movie in the cinema. But my point is if you are going to make a movie based on the end of the world or "in the future" why not just say the year 2234 instead saying 1998 or even worse the dreaded year 2000 which got milked loads!

Anyway in this post apocalyptic New York the Bronx has spiraled out of control so bad that the Law has vanished and is now run by a huge biker gang called the riders. Now the leader of the riders proper looks like Alice Coopers muscle bound guitarist from the 80's Kane Roberts.