MUSIC VIDEO: BEAST INSIDE OF YOU A NIGHTMARE ON ELM STREET 2 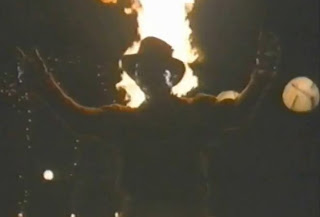 Anyone who has been following Lost Entertainment or knows me personally will know that I am obsessed with Freddy Krueger and the Nightmare on Elm Street franchise. Maybe not so much now that I am a "grown up" but form the age of 5 onwards I was regularly renting the tapes from the local video store (which I bought its entire horror vhs library when it shut down) and dressing up as Freddy at any given occasion.
Now I have done 2 articles in the past about Freddy one reviewing the shitty Nintendo game that LJN released (click here to read) and the Freddy Krueger 1-900 hotline number (click here to read) and as Freddy will always be topical here at Lost Entertainment there's gunna be plenty more.

I will review the toys, the board games, the Christmas decorations and of course the movies. Freddy was arguably the biggest icon of the 80's along with Mr T, Madonna, Ronald Reagan and Ian Beale.

Now I will be reviewing A Nightmare on Elm Street 2 on here at some point but at the moment its in a long list of articles to do.

Anyway I was on youtube drinking some beers and watching stuff when I came across this amazing fan made video montage of A Nightmare on Elm Street 2 with the song from the Fright Night soundtrack in the background. Its cool as fuck and makes the movie look ten times better than it actually was!