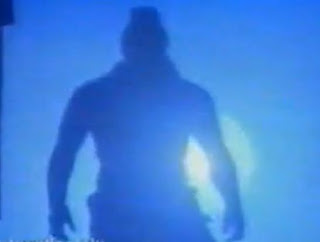 Ever wondered what Mr T would be like as a rapper? Well it happened! The self righteous "pitier of fools" released a rap album back in the 1980's. With tracks like "Treat your mother right" and "Mr T's commandments" the record won five Grammy awards and was an artistic success... OK so that was a complete lie the record was absolute toss but it still didn't stop idiots like me from grabbing a copy.

In his songs he raps about how to behave and be a good parent. Now a man who goes around driving a black van and beating people up would be the last person to start preaching to kids and parents world wide but at least his heart was in the right place. I've never really understood that phrase I've just said as it doesn't make much sense. If you have a heart that grows out of your left arm or shoulder does that automatically make you evil due to it being in the wrong place? fuck knows!

Now in this music video Mr T walks around a warehouse full of kids and street punks that wouldn't look out of place in Michael Jacksons music video Beat It. Mr T walks around rapping and for some unknown reason taking bits of metal off people bending them and giving them back as if he has done them a favor. Its as if these morons have been standing around all day with these things going "oh how I wish I could bend this flimsy bit of metal and be a real man...Whoah Mr T just bent it for me! You the man T" its fucking retarded.

The line between who is good and bad in this video is very blurred as Mr T gives certain kids the thumbs up and other ones he pushes through walls. At one point he even pushes over some crippled kid and busts up what looks like a friendly game of cards.

The video is just pure weirdness it really is just Mr T walking around a ware house high fiving people he likes the looks of and pushing ones he doesn't down flights of stairs and lift shafts.

The lyrics are fucking stupid as I am pretty sure Mr T wrote them himself and if you have ever watched Mr T on TV you will find he isn't the sharpest knife in the draw. He preaches how kids should honor their parents because the bible said so and how parents should help kids with their homework and even give them a kiss from him! Thats a bit fucked up imagine saying to someone about their young daughter "yeah give her one from me" you would likely get put on the sex offenders register and have a pack of angry Sun newspaper readers with flames and pitchforks outside your door. Anyway here is the car crash of a music video!