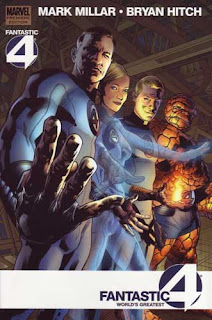 Mark Miller is always great at breathing new life into old comic book characters and this effort by he and Bryan Hitch is a must read graphic novel covering the issues of FF #554-561. The first half of the book has Reed Richards former love interest Alyssa Moy return to bring the scientific prediction of impending apocalypse in the next decade.

Moy and her new husband (who is the smartest man on the the planet) have made a second earth for humans to inhabit once the old one is gone and she needs the help of Mr Fantastic for the finishing touches. The new earth will have no weapons and will be policed by a giant robot named CAP (who was built in the image of Captain America) and is pretty much impossible to destroy.

During this time Johnny storm is launching his own reality show and fronting a rock band. He ends up in a romantic relationship with a super hot female super villain and Ben Grim is dating a teacher.

Just when everything seems to be going sweet the CAP robot goes on a rampage beating up all of the Marvel universe until Reed jumps into the anti Galactus suit (which costs a billion dollors a second to fund) and puts a stop to it.

After this a mysterious nanny turns up to looks after Sue and Reeds kids, Doctor Doom and Johnny storm get kidnapped by a future version of the Defenders and there is a roller coaster climax which I will not spoil for you.

I really urge to either buy this on Amazon or do what I did and join your local library and borrow it. I must say joining the local library if you are a comics fan is a definite win as you can take 14 books at a time and depending which is your local council there are always more than one you are allowed to be a member of.

If you are a fan of Mark Millar. Bryan Hitch, Fantastic Four or just good comics in general this is a must read. Admittedly the first half of the book is not as great as the second half is but it is still pretty cool. Ben Grim has some great lines in this book that really make you chuckle like when he asks a girl on a date and invites her to a bar which "even has a hand dryer in the mens room". The climax it self is nothing short of spectacular and makes you say "NO WAY!" with each page you turn.