GAMING: UK GAME STORES ON THE VERGE OF CLOSING 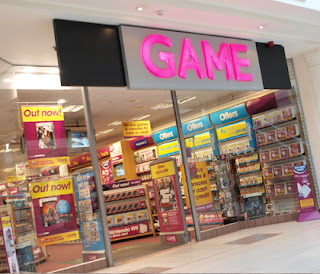 Yesterday I went shopping and like usual I never stepped foot into one clothes shop (or any other shop for that matter that a normal grown up would use). Whenever I go shopping its to browse the, dvds, video games, comics, guitar equipment, and toy stores just to see what the Transformers and WWE figures are saying.

After recently reading an article in the news about the GAME franchise being on the verge of going under I decided to head down and see what was going on. The article mentioned the stores were going to be doing a massive blow out sale to get rid of the stock so this thrilled me somewhat. However when I got there I couldn't find any bargains. I felt very sorry for the staff who are always very friendly and helpful people, who do not deserve to be made redundant. I was made redundant a few years ago and it wasn't a pleasant experience.

As I was browsing the store I over heard a customer really lashing out at a member of staff because a gift card was no longer valid. Even with all what's going down the guy was still extremely polite (which if that was me I would have probably flipped) and I thought that was very commendable and professional.

As I browsed the games though it was no surprise why this franchise is going down the shitter. I am an Xbox 360 owner and am really into my console gaming. Whenever a game I really really want comes out I will begrudgingly pay the £40 for it. However I think that with todays climate £40 is very steep for a video game. Yeah you do get your moneys worth out of them if it is something you play a lot but in most cases you complete it once and then thats it.

Not many people (especially youngsters) have £40 to spend on a video game. The most I have ever paid for a video game was £50 in April 1998 for Resident Evil 2 and I had to sell my Super Nintendo and my Atari 2600  to some horrid pawn shop in Romford and still only had half the readies. My mum kindly donated the rest of the money because she is a legend.

Anyway enough reminiscing about the day I bought the greatest video game ever. As the new games are all in the £40 price range (even the shit ones) I always browse the second hand games. This is what I think is stupid even the second hand games are £27.99! Thats a fucking joke! Selling second hand games (that they have only paid the previous owner a fraction of the games value) at a similar price as a brand new game is just ridiculous.

The only real bargain I saw was a Pro Evo game from 2008 that was like 50p or something. Don't get me wrong there were games like Red Dead Redemption and LA Noire for like £14 which is pretty good value but anything more recent in the preowned section was £20 or over.

If you are looking in that section you more than likely are not looking to spend that kind of money on a second hand item and why should you? Now there are things like lovefilm.com which send you any game you want in the post for £15 a month then why bother visiting GAME? Amazon is always good with prices and when you reserve a game sometimes they even knock the price down so why bother visiting GAME?

Also the fact you can now download video games via Xbox live and Playstation network, you dont even need to leave your seat. Also the fact that supermarket chains now stock video games must have a big impact on the GAME franchise. The last Xbox game I bought was in fact in Tesco's, as I was food shopping and really wanted a copy of Saints Row The Third so I killed 2 birds with one stone.

I am sad that the GAME stores might be closing for good as it has always been somewhere I go when shopping. I feel very sorry for all the hard working and helpful people that might lose their jobs. With this current economic climate the shops I like to visit are all disappearing one by one. It is getting to the stage where I wont have to visit the mall anymore as there is nothing left for me.

It is amazing to think that such a store could be shutting shop when the gaming industry it self is booming. So what is the reason for GAMES demise? I would say a mixture of their products being over priced in a time when people don't have the money, the evolution of web shopping and the competition of chain supermarkets stocking the same products.

I will miss GAME but I guess its just evolution baby!
Posted by Kris Rodriguez