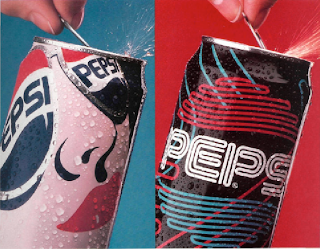 So 1990 was a cool year, there was the Italia 90 World Cup, Wrestlemania VI, Teenage Mutant Ninja Turtles were on top form and Pepsi hit a home run with a great marketing pitch that summer.

Now I have always been a fan/mass consumer of soft drinks all my life. After spending a lot of time growing up in Malta (a beautiful island located in the middle of the Mediterranean) soft drinks played more the role of a survival tool than that of a fizzy drink. The place was so hot and after walking round in the hot sun all day a bottle of 7up (a freezing cold old school glass bottle I might add) could really save your life. This is no exaggeration and if you ask anyone who has also made the mistake of walking from Mellieha beach uphill to the town center in the middle of August, it is no laughing matter as I am sure going down in it a wheelchair during winter isn't as well. When you got to the top there was a place that sold cold fizzy drinks which is where the life saving part came into play.

Now enough about Malta and more about Pepsi from 1990. To help take you back to this glorious time I have dug up this commercial from 1990 to get you in the mood. That last sentence  made me sound like I was grooming you up for something pervy then but I can assure you I wasn't... or was I?

OK so now we come to the big marketing scheme Pepsi did that summer and that was giving the cans a new look for a certain period of time. It was a new decade so trying to make a statement about moving on with the times they released the Pepsi Cool cans collection. 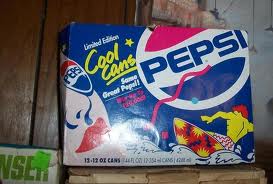 Pepsi Cool multi pack box from 1990.
The Pepsi cool collection consisted of four cans that had different designs. One had a woman's face wearing sunglasses that had the Pepsi logo in the reflection, another with a pink version of the Pepsi logo with swirling colors, another with a cartoon dude surfing in front of the logo and a black can with Pepsi letters in neon lights all over it. 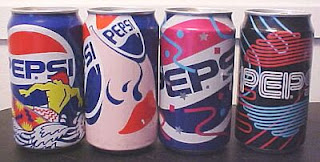 Now something very interesting happened with black can with the neon writing. If you got another can with the same design and placed it on top of the other can this happened.

The word sex would become blatantly visible. So what was Pepsi's intention with this little real life Easter egg? Was they trying to say that Pepsi is just like the act of sex, where sex being the definition of enjoy and having a cheeky dig at Coca Cola's "Enjoy" tag line? Or were they just trying to be all outlandish and shocking because it was the 90's now? Or were they trying to just promote sex in general?
I guess Pepsi would only market sex if it did not involve Madonna and black incarnation of Jesus Christ, which some reason they really didn't like back then.
I have seen full sets of these cans go for up to $100 on ebay before which makes this range of cans fore runners in the world of soda collecting, which is a now popular hobby where people collect old fizzy drinks cans and bottles.
Posted by Kris Rodriguez