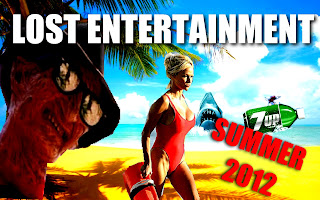 So the nights are getting lighter, the weather is getting warmer, and after seeing people wearing shorts recently that means only one thing, summer is just around the corner. Of course there are many things to get of the way first such as spring, the football season and WrestleMania XXVIII.

This year at Lost Entertainment the site will be moving with the seasons from summer, Halloween and right up to Christmas with content related to the season in progress. Confused? then go and smash a toilet lid on your fucking head!


SO WHAT'S IN STORE?
Reviews and articles related to summer like...
THE BIG BREAKFAST
BAYWATCH
THE JAWS MOVIES
GRAND THEFT AUTO VICE CITY
COOL SPOT
INFLATABLE TOYS (NOT SEX ONES)
SUNNY DELIGHT
WWF ICE CREAM BARS
OUTRUN
THE 1992 OLYMPIC GAMES
DEAD ISLAND
A TRIP TO MALTA
SUPER SOAKERS
BEVERLY HILLS COP
AQUA MAN
POINT BREAK
DIE HARD WITH A VENGEANCE
ZOMBIE FLESH EATERS
CARRY ON CAMPING
PIRANHA
MIAMI VICE
TRUE ROMANCE
AND MUCH MORE
So over the next few months until June I will be preparing stuff to write about which is summer related. If there is anything you would like reviewed or included please drop me a line at
E-mail here or message me on facebook
Now there is no other way to end this other than playing the song which officially starts the road to summer.
Don Henley - Boys Of Summer by jpdc11
Posted by Kris Rodriguez