TELEVISION: THE ADVENTURES OF PETE AND PETE 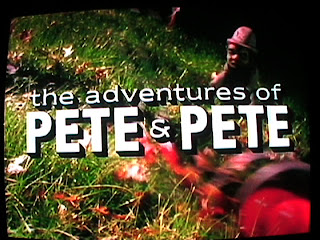 The 1990's really was the golden age of the kids TV channel Nickelodeon. With shows like Clarrissa explains it all, Rugrats,  Kenan and Kel, Sister Sister, Ren and Stimpy, Arghh Real Monsters and so many more great shows which would take forever to list, it is pretty safe to say that Nickelodeon kicked ass. One of my favorite shows was The Adventures of Pete and Pete. 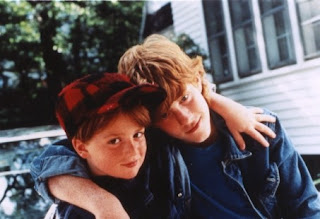 The show was about two brothers who had the same name and who both had the misfortune of being ginger. Older Pete was a normal kinda teenage guy and younger Pete was a badass who had a tattoo of woman (Petunia) on his forearm which danced when he moved his arm. The boys mother was called Joyce and she had a metal plate in her head which could pick up radio signals and their father was called Don who was obsessed with the upkeep of his front lawn.

The couple met when Don was using his metal detector and it picked up a strong signal from Joyce's skull and the rest was history.

The show had a superhero called Artie who was the strongest man in the universe, even though he was just a really skinny guy with glasses. Older Pete had a friend called Ellen who was kind of a mix between a friend and a romantic attraction, who was obsessed with amateur greco roman wrestling. Older Pete had an arch nemesis called Endless Mike who was named endless due to the fact he had to repeat the same year at school every year.

There were lots of other characters floating around in the weird and wonderful kids TV show which escape me at this time. The show had a very cool and surreal feel to it with the absurd story lines, over the top characters, and wonderful use of color, Pete and Pete is a show that really makes me feel I am right back in 1994 whenever I look it up on youtube. The show ran from 1993 to 1996 and had a nice three year run with about 30 episodes a season.

As a kid I loved the show and found it very entertaining and cool but I always was a bit confused about all the stuff that was going on, as the writers of the show threw the rule book out of the window and made a world where pretty much anything was possible. However many years later as an adult I got mega stoned one night and put the show on and everything made perfect sense, which made me think was this show aimed for stoners as well as kids? Ren and Stimpy was a cartoon for adults which was censored and put on the same channel around this time also. Thing is with smoking weed you find hidden meaning in everything when your on it and then once its wore off you realize your not a genius just a stoner.

The show also had one of the best theme songs ever in my opinion. Watch the video to take a step back to 1994.