GAMING: GTA IV FOR WHOM THE BELL TOLLS 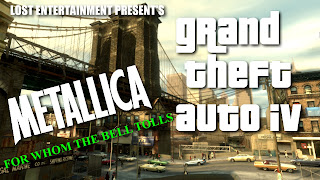 So today I posted some shit games that lovefilm decided to send me instead of the ones I actually wanted. So I decided I would play some GTA IV until something better turns up. Grand Theft Auto games have always been a great way for me to kill time as well as the pedestrians and cops of Rockstars fictional America. This has been a favorite past time of mine since 1997 and I am sure it will be for many decades to come.

As I got older and got more experienced at the game, the levels of carnage and chaos I can cause is something quite spectacular. Last year I made a video montage of the game with footage of one of these outbursts (click here to watch), with Motorheads cover of "Breaking the Law" playing in the background.

Today I stole a tank from the LCPD and went on a rampage killing everything I could come into contact with. I filmed some footage of the mayhem and put Metallica's (best song!) For Whom The Bell Tolls in the background for good measure.

I will be filming more of these video games music montages in the near future. At the moment I am just learning and having fun.

This is from GTA IV: The Ballad Of Gay Tony on xbox 360. If you wish to add me on xbox live my online tag is SGT W0NKEY if you ever wanna kill some cops or something. I use no cheats also as I am that damn good!