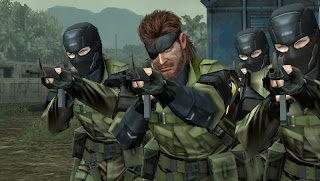 Oh how I really wanted to complete metal gear solid peace walker.. Unfortunately theres a shitty championship manager mode which isn't an option! You have to play through it or you cant progress any further. I play Metal Gear Solid because I like sneaking around and blowing up giant killer bosses. I do not play games like this so i can manage teams and organize people to do specific roles.

So I am a huge MGS fan and have been since 1999. I got the MGS HD collection on Xbox 360 and have been enjoying playing the games in their timeline order. After beating MGS 3 I was enjoying playing the exploits of Big Boss back in the day. I really started to enjoy Peace Walker until I beat a very tricky boss (a tank with gay respawning soldiers just for good measure) and was not allowed to progress any further.

The reason for not being able to progress is due to Snake not having any C4 to blow a barrier up. So how do you get C4? Well first you have organize a team at your mother base (a separate part of the game which I am ranting about) and get your wamky team to build it for you. Not only do you have to get the team to level 12 to even be able to make the C4 but you then have to earn points for them to build it.

So I looked online and the only way to solve this problem is to replay all the old levels again or do some other mundane gay shit to rack points up. So this whole time we are meant to believe that Snake just sat there smoking cigars waiting for his team of monkeys to create C4?

I love Metal Gear Solid but this is fucking BULLSHIT!!!

Assassins Creed has a similar thing with the assassins guild mode where you can control teams of assassins and assign roles to them. The difference is in that game you can still progress through the games story line without even playing it. In Peace Walker it is essential that you MUST do this side mode or like me you will end up stuck.

I have rented the HD collection and do not own it. So why the fuck am I going to bother maxing out my armies stats and making sure that all of toilets are always clean on mother base when I will be posting the game back soon anyway?

I do not intend to nor want to replay all of the missions I have just played to build stats up for this shitty side mode. In the past the sensible thing to do would have been to leave some C4 laying around somewhere for the gamer to pick up and carry on!

All I wanted to do was play through the story of the game nothing else. After hours of trying to sort the mother base mess out I have had enough. What I am going to do now is eject the disc and pretend this whole thing never happened, and then play MGS on the PS1.
Posted by Kris Rodriguez