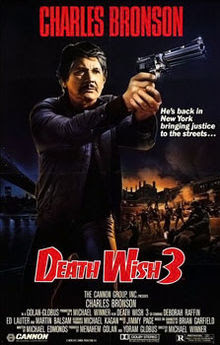 Today on Lost Entertainment we give you a complete movie free of charge to stream on your computer. Todays movie is the Michael Winner cult classic Death Wish 3 with the mighty Charles Bronson.

Death Wish when it first came out in the 70's thrilled and shocked audiences all over when it was first released. It was the story of Paul Kersey a decent man and whose life was shattered after a gang brutally raped and murdered his wife and daughter. Kersey fights back by killing all the muggers and rapists that lurk the darkest parts of New York in some of the most thrilling movie scenes of all time. Paul Kersey was pretty much the Punisher of the 1970's.

Now we jump to 1985 and Kersey is back in New York and this time he is taking the fight to a street gang which is terrorizing the residents of East New York.

The movie is a classic shocker and is cheezey as hell along with some great action scenes involving bikers and massive machine guns. Not one to be taken too seriously but I think its a fucking cool movie. Plus Jimmy Page from Led Zep composed the movie score. This sequel is trashy as hell and I love it.

Today on Lost Entertainment (and depending how long the movie is up) I give you Death Wish 3 in its full entirety as a gift for you the bored people that are sitting here today.