HALLOWEEN COUNTDOWN 2012: GAMING: I VANT TO BITE YOUR FINGER 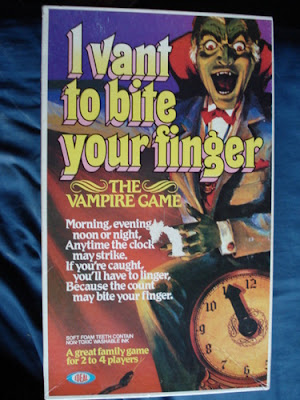 "I Vant to Bite Your Finger" was a board game released in the early 1980's by the giant toy and games company Hasbro. While reviewing the 1985 Spring Summer Argos catalog (click here to read) I spotted this game in the board game section and it brought back such great memories.

This was a game I used to play a lot when I was a kid with my sisters and other kids in the area. The game had a very simple concept and could be picked up almost immediately.

The idea of the game is to get round the board without waking Dracula. Each player would pick a number between 1 and 12 and move around the board in steps according to the number they just picked.

However you must also move the clock around in accordance to the number you just picked. If Dracula's cape opens during this the player must stick their finger in Dracula's mouth. Sometimes the bite does not register and you can get away without any damage but more often than not Dracula would bite your finger leaving 2 puncture wounds on your poor finger.

I VANT TO BITE YOUR FINGER TV COMMERCIAL 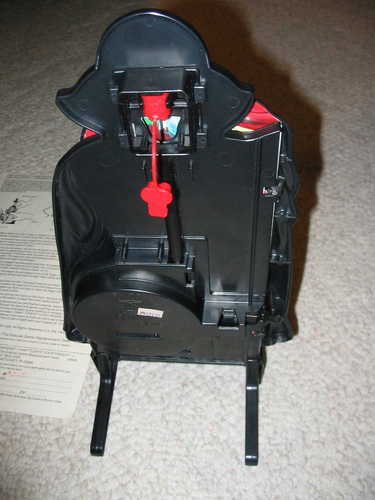 Of course the puncture wounds and blood were all harmless thanks to the nifty button operated red felt tip pen device at the back of the game. 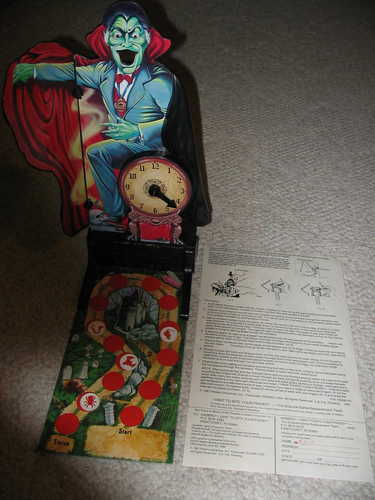 As you can see from the above image, this was what the game looked like once set up. During play you would shut Dracula's cape. The more the clock would move the more likely that the cape would open and all hell would break loose. The game was pretty well designed and was very pleasant to look at in terms of artistic quality. The rule book was pretty cool as well, check out the scans below. 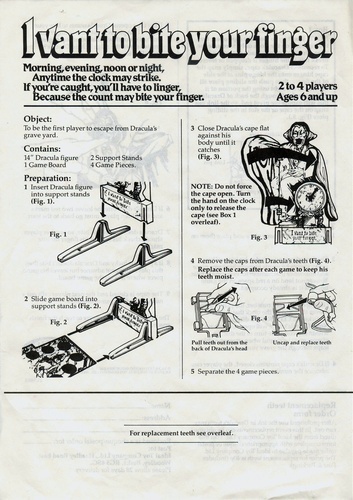 I love the replacement teeth part at the bottom of the rule book. I am going to write to them and see if they will send me some teeth in the post. If they dont then... they are just cunts! 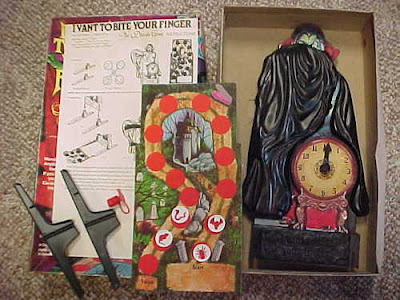 To the best of my knowledge they stopped making this board game many years ago and never re launched it. I wish they would because I fucking loved this game, and I want to play it on Halloween. Thats it for today but if you have missed any of the Halloween countdown so far then dont panic, as all of the Halloween articles featured so far are linked underneath this post.

Email ThisBlogThis!Share to TwitterShare to FacebookShare to Pinterest
Tags dracula board game, i vant to bite your finger, vampire board game
Newer Post Older Post Home