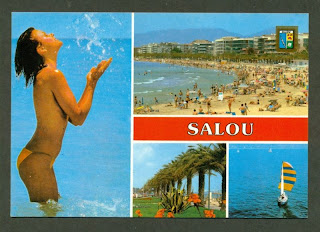 So after very busy summer keeping all the readers of Lost Entertainment occupied during the very rainy season we just had I decided I needed a vacation. After a spontaneous booking I found my self in the sunny Spanish seaside town called Salou. I had never been there before and I learned quite a bit of new knowledge in my short time spent there. For instance did you know that the town of Salou is over 15 years old and there are over 45 locals who speak Spanish as their native tongue? Well now you do! 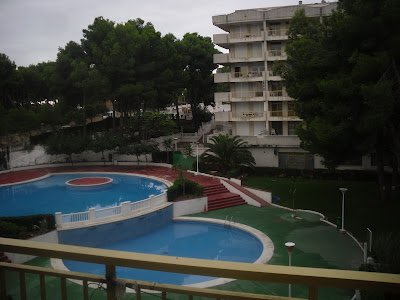 The resort we stayed in kinda looked like the Limes Farm council estate plus a swimming pool.. which was locked and not allowed to be used at all. Its a good job the nice hotel next door had an open pool for us to use without their permission! 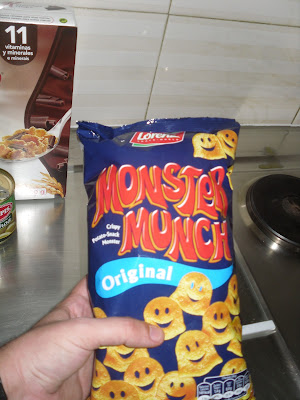 Copyright infringement is a leading career in Salou

In Salou (and any tourist place in central Europe for that matter) bootlegging and copyright infringement is all the rage. All the local tourist shops are filled to ceilings with fake Barcelona shirts, bootleg action figures and loads of other crap which I will be showing you in this article. The best bootlegged item I found was in a local supermarket. A bag of crisps claiming to be the real Monster Munch. Now everybody knows about Monster Munch and how they are a household name which have been around for the last 30 years or so. Spain however blatantly could not give a fuck about the real Monster Munch or copyright laws for that matter. 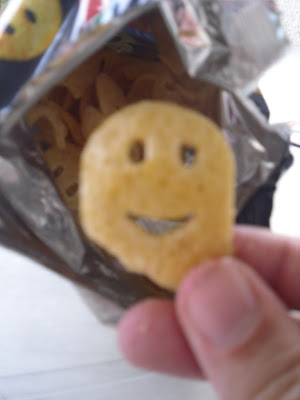 The best thing about fake Spanish Monster Munch is the fact that they are not monsters at all. In-fact  they are just crisp smiley faces. For the record they were some of the nicest crisps I have eaten. And I have eaten a lot of crisps in my time. 48 bags (an entire box) of beef Space Raiders when I was stoned in 2003 was my largest recorded binge. 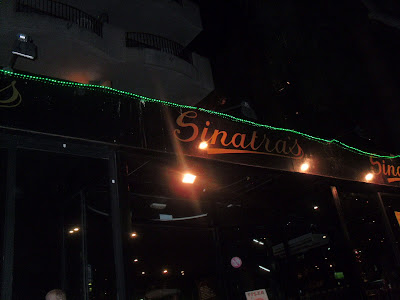 "Sinatra's" Mickey Flannigans favorite haunt when going "out out"

Salou has lots of bars and restaurants which are all very nice. Eating in restaurants is very reasonable price wise and the food and service is of excellent quality. Due to the amount of restaurants and bars in the area it is very competitive and the restaurant and bar workers take to the street trying to entice the costumers in. This makes deals on food and drinks very good on the costumers behalf and you get treated very well along with complimentary drinks etc in the hope that you come back the following day. We went to one bar on the first night called Rooneys and the owners gave us some Ipod speakers free of charge as well as complimentary shots. We went back to the pub the next day but it was shut which was a shame because we never got to properly thank them sober so if you guys are reading thanks again! 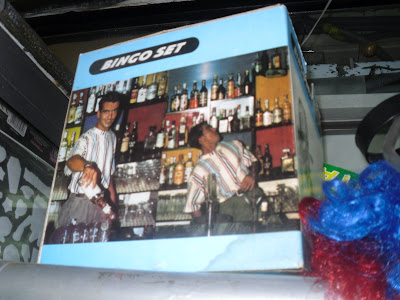 Packaging designs in Spain are very out there and quite fucked up to say the least. For instance look at the picture above which is a bingo set in the toys department. The box has two latin men at a bar with one pouring lots of booze away and another having a staring match with a 7 foot tall poltergeist. What does that have to with bingo? I still dont fucking know! 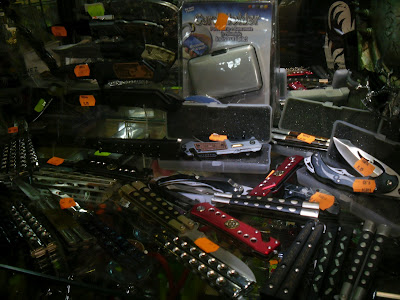 All the shops in Salou are filled to the brim with illegal weapons, drugs paraphernalia and any other stuff you could be arrested for carrying round with you in public. Wether it be replica guns, butterfly knives and weed grinders with Pat Sharps face on, these shops had it all. There were many bizarre items like sling shots with weed logos on and one shop was selling crack pipes which were central to the Hello Kitty soft toys. On the street you get harassed by Nigerian "looky looky" men who try to sell you stolen perfumes and sunglasses at any cost so if you go to Salou you have been warned. Mind you they are not that much of a pain but can be a real annoyance on the beach when you are just trying to chill out and mind your own business. 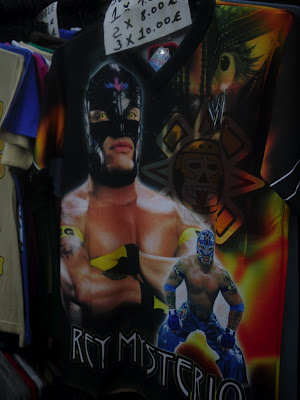 As well as bootlegging crisps Salou also stocks some great bootleg T-Shirts. Wether it be music, football shirts, fake designer shirts and bags and fake metal shirts Salou has it all and its all cheap cheap cheap. Most of the stuff is horrendous like the above pictured Rey Mysterio shirt but sometimes you can come across something cool. I got some cool bootlegged KISS and AC/DC shirts all for the price of 10 Euros in one of these places. 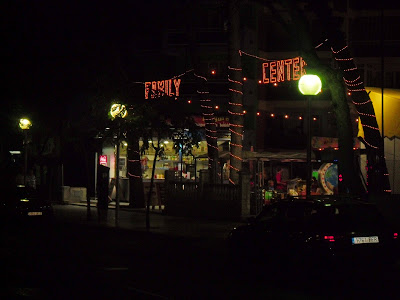 Spain has some great translations from Spanish to English. Like the above picture which is of a theme park which is simply titled "FAMILY CENTER". The same country which labelled Baywatch "The Guardians of the Bay" did not let me down one bit during my short stay. 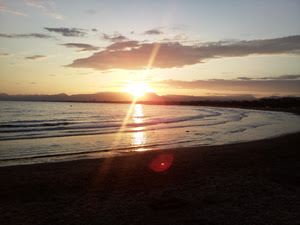 In closing Salou is a really nice place to visit for a weeks holiday. I think 2 weeks would be a bit too much. The weather is amazing, the locals are friendly and there is fake Monster Munch. Also if you do go to Salou dont book with Easy Jet as they are a shower of cunts. Until next time.
Posted by Kris Rodriguez