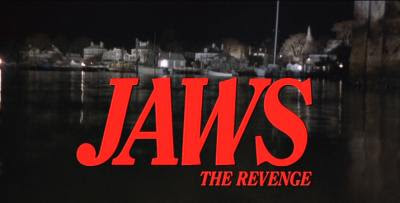 I know what you are thinking, "Jaws? Christmas?" but yes there is a Jaws Christmas movie. I wish I was making it up but it happened. Jaws The Revenge is easily the worst sequel ever made (up there with Terminator 3 and Rocky V) and a great contender for the worst movie ever made prize also.

So the movie starts out its Christmas time in good old Amity Island and chief Brody's dead and his youngest son Sean is now the new chief of police. Not for long though as he get chomped to bits while unhooking a boat or something. Its very graphic when the shark bites his arm off with buckets of blood everywhere. When I first saw this movie when I was five and I remembered that and how fucking cool it was. Infact when I was five I remember thinking this was a great movie.

Now re-watching as an adult I can point out all of the blatantly obvious flaws and barrels of dog shit this movie contains. So the ridiculous plot of this film is that a great white shark has a grudge against the Brody family because their dead dad blew up a shark a few decades ago in the first movie. Hes not the first as for some reason in Jaws 3 (the previous sequel) another great white followed the very same family to Sea World! I understood Jaws 1 and 2 having the same family in the movie as the first two as they were set in the same place, but having the later sequels in different locations with the same family involved its fucking stupid. Its beyond science really how the fuck do these sharks know to have a beef with some family because one got blown up ten years before, it just doesn't make sense!

The family decide as Seans just been eaten that they should go and stay with Michael for Christmas and surprise, surprise he leaves at a beach! A beach in the Bahamas infact and this is where the movie goes beyond stupid when the very same shark follows them! Great white sharks are very fast and powerful individuals but they cannot swim faster than planes. I checked it out and they cannot also board planes either.

The great thing about the original Jaws movie was the fact that you did not see much of the shark and when you did it was on a rare occasion. Jaws the Revenge absolutely does not give a fuck and you constantly see the most unrealistic lifeless great white shark they have ever made. 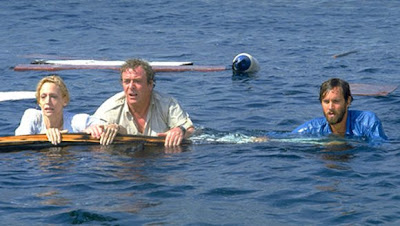 The cast in this movie do their best I guess to try and do an honest job of an awful script. Michael Caine even has this terrible film on his CV acting as this sleazy English plane pilot bloke who keeps trying to bang chief Brody's distraught wife. She is pretty good even though she has to put up with the most insensitive family ever brought to the silver screen with "come swimming nan!" after her sons just been chomped to pieces by a shark. I would say its one to avoid but if you smoke a jay and watch this you will die laughing when the old lady stabs the shark with a boat its comedy gold.

TOYS: MY CHRISTMAS PRESENTS FROM 1991 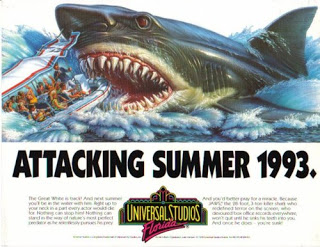