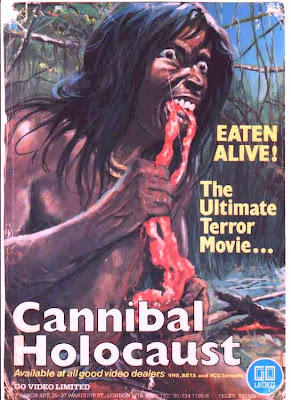 So recently I sat down and watched Cannibal Holocaust for the very first time. This movie maybe the most controversial movie of all time and one of the most stand out flicks when you are talking video nasty's.

So the plot of the movie is as follows;

A group of documentary film makers go missing after going into the amazon to film a tribe a of natives who consume human flesh. A search party is sent out and they manage to gain the respect of the tribe and stay with them for a short period of time without being eaten. They also manage to salvage the film makers footage but not the film crew its self. A New York news television station wants to air the footage on national TV.

When the footage is brought back to New York and viewed and is very evident that the film crew were not the oh so innocent victims they were expected to be.. and they turn out to be the real savages. 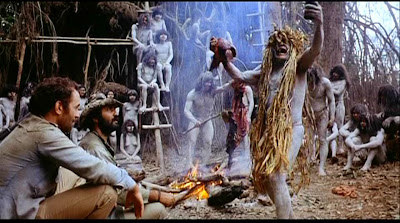 Cannibal Holocaust is the first ever horror movie to be filmed in the Blair Witch style of "real" found footage film making. In fact the film seemed so real in fact that the director was arrested soon after for this movie was made. The film seemed so real that the authorities nabbed the movies Italian director Ruggero Deadato for charges of obscenity and making a real life snuff film. The film makers had to prove that the movie was in fact that, just a movie and were soon released. The movie would be banned universally soon after. 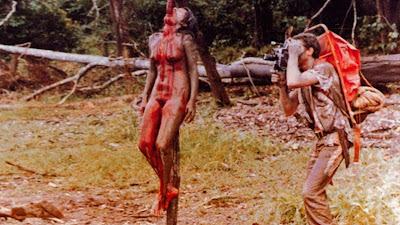 The movie as expected contains lots of very graphic and violent scenes which you would come to expect anyway with a title such as this. There are also many savage rape scenes which are quite disturbing. The thing which really pissed me off in this movie is that there are many scenes of animal cruelty such as a turtle being being mutilated while still alive, a monkey gets its brains bashed in with a hammer and some other quite shocking and sickening moments. I am a firm believer that NO animal or human should EVER be hurt or killed for the sake of a motion picture. This is my main grudge against this movie as I am a big animal lover. 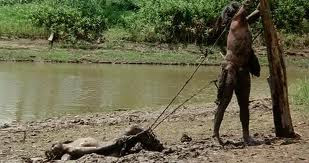 Apart from the above mentioned animal cruelty Cannibal Holocaust is a great movie and very good social commentary on the civilized and the uncivilized. This movie could easily be remade at a good standard and would pack asses in movie theater seats if done correctly. However due to the animal cruelty I have to morally give this one a thumbs down. It is an experience to watch this film and it is something that will stay with you but I don't know if that is such a positive thing..
Posted by Kris Rodriguez