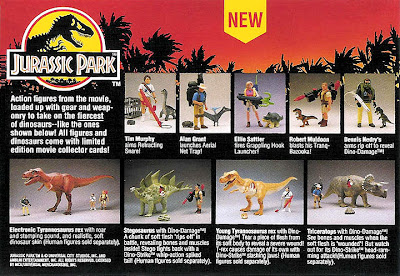 So in 1993 one of the biggest blockbuster movies of all time was released. No I am not talking about Mr Nanny, I am talking about Jurassic Park.

The ultimate dinosaur movie about a safari park that had real life dinosaurs in it. Audiences were thrilled and terrified when everything went to shit when the power went and the inmates (prehistoric ones to boot) took over the asylum and raised all kinds of hell.

I saw this movie in the cinema the day it came out and its a movie experience that still lives with me today. Like always when a decent movie comes out (especially in the 80's and 90's) it will soon be followed by a line of action figures and play sets. Thankfully it was Kenner that picked up the license who have a very good track record when it comes to making decent quality toys and especially toys of movie and TV characters. 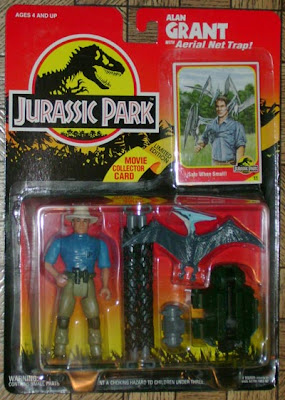 So they released figures of all the characters in the film. Each figure came with lots of accessories including guns, harpoons and a baby dinosaur each. The figures were as good as you could get by 1993's standards. 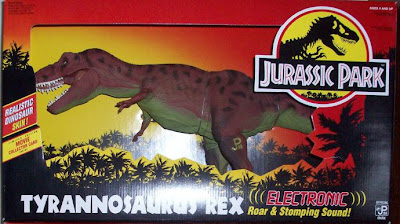 Although the figures of the humans were pretty cool the main thing everyone wanted was the dinosaurs, as lets be honest they were the main stars of the move. I'm not saying that the actors did a bad job or anything like that but seeing the most life like dinosaurs tops anything that any human can say or do. If you saw Jurassic Park just because you like the acting work of Jeff Goldblum, or some other retarded bullshit that has nothing to with dinosaurs then.. get the fuck off my website you twat! 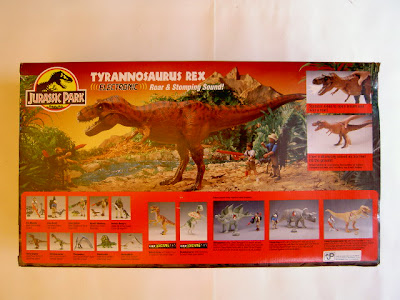 They released many dinosaurs in the toy line that did some pretty cool shit but the T-Rex was the must have toy of the bunch. The T Rex was the Castle Greyskull when it came to this line. And rightly so as the T Rex made noises, had removable parts for battle damage and the jaws opened and shut. 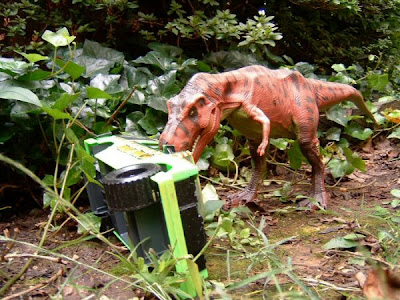 Another great thing about this toy line which was a winner for me was, that they looked amazing in the back garden when you played with them. The back yard really did become the jungles of Jurassic Park! 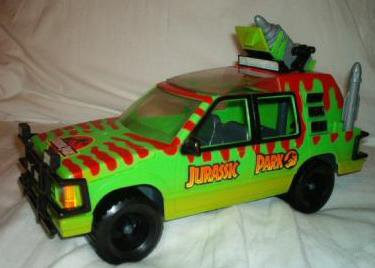 The line also released some pretty cool vehicles but a lot of them were non movie related things like a helicopter that can trap dinosaurs. The best vehicle is the one that's actually in the movie, the jeep. This one however has missile launchers and loads of other pretty cool shit. 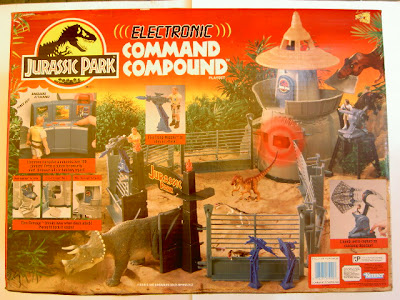 The biggest (and most expensive) toy of the lot was the Jurassic Park Command Compound. Although this toy looks the absolute bollocks on the box it was somewhat of an anticlimax when you opened it up. 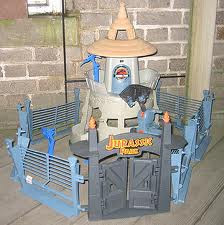 I ended up using my control center (or what ever the fuck its called) as a jail for my out of line GI Joes and other action figures that had been brought to justice for their murders and rapes. They released a second line of Jurassic park figures in 1994 which was a terrible idea that fell flat on its face. No one wants toys of last years blockbuster movie when this years blockbuster has toys out also. They released another set when the Lost World was released which didn't really take off either.

The thing with these toys also, was the fact that dinosaur toys have always been available at very cheap prices which was something which would some what hinder the success of this line. Why would parents splash out on expensive licensed toys when they can get cheap knock offs from next to nothing. Jurassic Park returns this year to the cinema in 3D as it marks the 20th anniversary of the movie being released. I cant believe its 20 years ago.. and I still haven;t grown up.