EASTER SPECIAL: TOYS: THE MANY ACTION FIGURES OF JESUS CHRIST 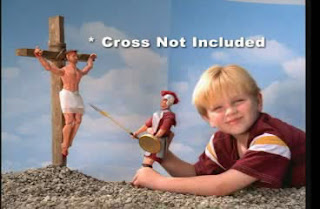 So with today being Good Friday Lost Entertainment will be showcasing the dolls and action figures of the one and only Jesus Christ. With the amount of action figures that have been made over the past 50 years it was only a matter of time before Jesus would be immortalized (yet again) in the form of a plastic toy. In theory Jesus has always been one of the first toys around when you consider the fact he is the focal point of the nativity set which maybe the first universally sold playset in history.

Today we are going to look at some of the coolest Jesus action figures ever made. 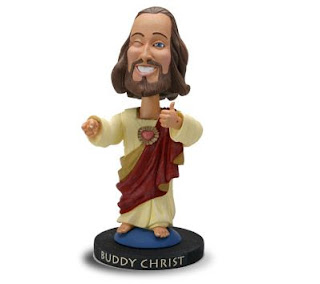 Buddy Christ is one of the most popular Jesus Christ toys on the market and is very common. His head bobbles to which is always a bonus I guess. I have seen these in the back of cars before bobbing away at the oncoming traffic. If I was a big Jesus fan and I crashed my car killing 6 people and I had this on my parcel shelf I would be off to my local church for a bit of a moan. 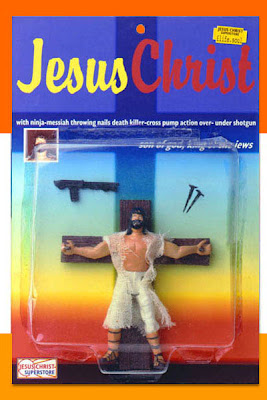 This Jesus maybe my favorite as he has the "crucify me" action and accessories going on. He comes with his own crucifix and some nails. Is that the spear of destiny in the top left hand corner or a grenade launcher? Either way I am sold. I want there to be Mexican bootlegged Jesus figures. A Jesus with the body of He Man with a chainsaw would be something I'd be happy with as a main Christmas present. 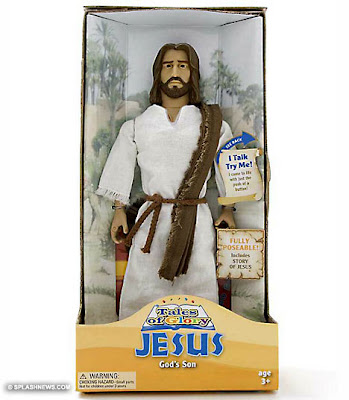 This one maybe the best of the bunch. A realistic 12 inch Jesus doll which kinda looks like an action man. I would have loved one of these when I was a kid. Dr X vs Jesus would have been a great war. Jesus would be like the new Terminator there would just be no way of killing him. Well fire would fuck him up. If Jesus would make a comeback after that I would believe in God forever and sell my story to ITN. No not a crying Virgin Mary statue on tonights news no, this prick from Essex has a Jesus figure which can heal it self after being set on fire! I am actually thinking of doing a Turin shroud style hoax by burning him only to replace him with another new figure when no ones looking.. Well if all else fails with my life I will give it a go. 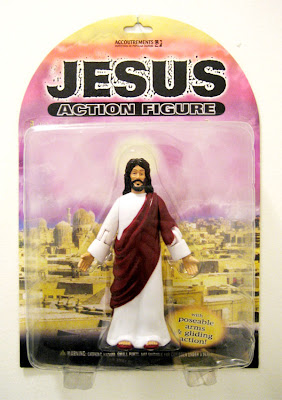 This one is the most common Jesus figure around and was used in a famous movie which escapes me at this very point in time. You can pick one of these up anywhere online and they are not to expensive. For some reason this figure has wheels at the bottom. I have no idea why, and the only thing I can think of is that they wanted to do a little nod towards Jesus's roller skating career. 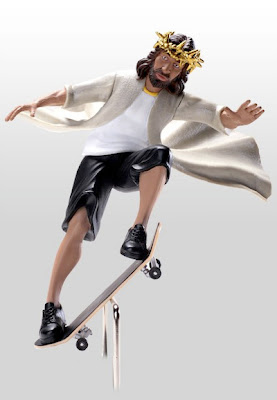 Although I just made a silly remark about Jesus roller skating there are infact figures of Jesus doing such things. Above we see one of the toys grinding a rail with a skate board. Who ever made these toys deserves a big thumbs up. 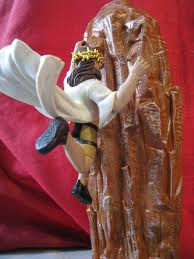 Here we have a cliff climbing Jesus which is pretty cool, but it looks like he is climbing a giant Cadburys flake. Or a giant turd? 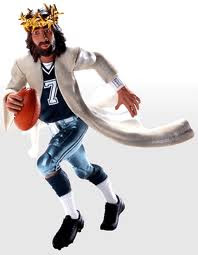 Finally we have Jesus in his NFL gear. If he can turn water into wine imagine how many touchdowns he could make out of one touchdown. Thing is we all know Jesus was a wimp so I cant imagine him being good at American Football. Unless he cheated.. like he did with everything else! 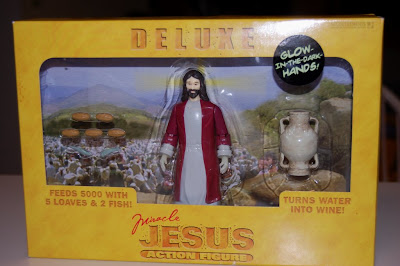 Our last figure is the deluxe edition of Jesus Christ. This one comes with accessories which are, a water jug, some loaves and some fish. For some reason the hands glow in the dark as well. I have no fucking idea why. While we are on the subject of the miracles of Jesus, I personally think that Jesus was a bit of a flash bastard and a very tight one as well. If he would have put in his fiver in for the booze run like everybody else, then maybe he wouldn't have had to perform such miracles. Thats all for today Happy Easter!
Posted by Kris Rodriguez