So we are on the road to Wrestlemania and things have heated up in recent weeks. Wrestlemania is the biggest event of the year and in my house it is more important than Christmas. Today I am going to share with you a list of moments which made me "mark out" (lose my shit for you non kayfabers). Over the next few weeks there will be a lot of Wrestling related content on Lost Entertainment to celebrate the grand spectacle that is Wrestlemania.


10. HULK HOGAN RETURNS TO SAVE EUGINE AT WRESTLEMANIA 21 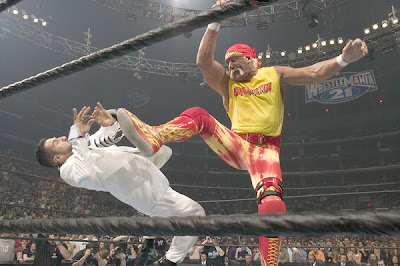 This may be a surprising entry but you must take into consideration that I am the biggest Hulkamaniac going (Well as long as it's Hogan working on WWE TV and not WCW or TNA that is). Every time Vince and Hogan get together there is a certain kind of chemistry and magic in the air which cannot be duplicated by anyone else and anywhere else. In 2005 when I was watching Wrestlemania 21 live with a few friends and I wasn't enjoying it as much as the previous manias I had watched live. So Eugene comes out and starts doing a promo and is the interrupted by Mohammad Hassan and his manager. Eugene ends up in the camel clutch and then BOOM Hogans theme music hits. At this point everyone in the arena and everyone watching the event at my house lost their shit and went crazy. Hogan cleans house and then there's a massive pose off at the end. This for me was one of the best moments for personal reasons . I am sure there were people who didn't enjoy this surprise appearance as much as me and my friends (probably because they found out what was going to happen on some shitty website beforehand) but we all had a blast.

9. HBK ENDS THE CAREER OF RIC FLAIR AT WRESTLEMANIA XXIV 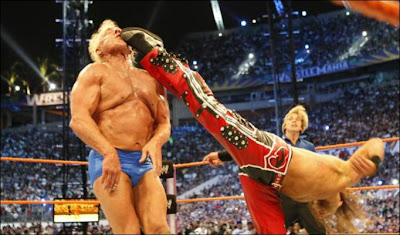 Wrestlemania XXIV was easily one of (or if not) the best Wrestlemanias of the past decade. The whole show was hoot from start to finish. With an outstanding card one of the matches which stood out the most was Shawn Michaels vs Ric Flair in the career ending match. In Flairs final WWE match with Shawn Michaels he put on the performance of a life time and turned up the gears so much so that you actually thought he might just be able to do it. Unfortunately Michaels sweet chin music would be the decider in one of the most heart wrenching moments in WWE history. Flair would go on to cry on live TV for an entire week only to turn up in TNA a few years later due to money troubles. 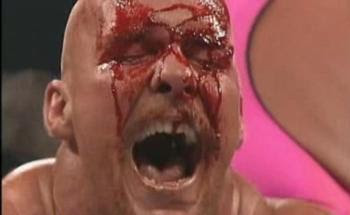 At the time this may have been the bloodiest match in WWE history. The feud between Steve Austin and Bret Hart started in the October of 1996 and boiled all the way through to August of 1997. While the moronic fans were switching over to WCW Nitro instead of Raw is War each week they were missing out on maybe some of the best TV ever to be recorded. The feud between Bret and Steve Austin was hands down the hottest thing to happen at the time and helped pave the way for the Attitude era which would ultimately be the most successful time in the companies history. In the submission match anything went and everything happened. Austin and Hart brawled all over the arena using everything but the kitchen sink to destroy each other.  In the end Austin would get badly busted open and placed in Harts deadly sharpshooter. Austins face squirting out blood is one of the most iconic images in wrestling history. Austin passes out in the end but never says I quit. Hart would turn heel at the end of the match and Austin would be catapulted to the top of the organization within a few months. 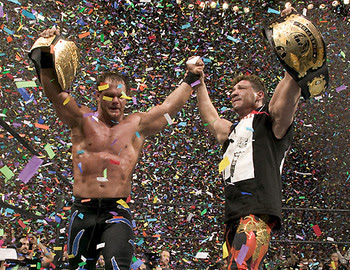 We all know what happened with Chris Benoit and how wrong and diabolical the things he did in his last hours were, but there is no denying that he was one of (if not) the greatest superstars of all time. When Benoit won the title at Wrestlemania XX in the best triple threat match of all time, it was a very emotional moment for everyone. The WWE has always emphasized that the entertainment part of the business is more important than the wrestling side of things. For example just take a look how they buried guys like Lance Storm and Dean Malenko for being "boring" even though they were pound for pound two of the best wrestlers around at the time. When Chris won the title it was a massive finger to the sports entertainment lot and a big thumbs up to the sport of professional wrestling. It was a great moral victory with a fairy tale ending. Chris wasn't famed for his promos nor for his marketability. Chris was a wrestler and a workhorse and when someone of that work ethic goes all the way to the top after many years of hard work and sacrifices its a very special thing. The fairy tale would take a grim turn for the worst 3 years later. 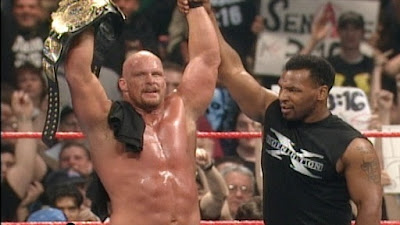 After nearly having his career ended in the previous August Stone Cold Steve Austin would return to the ring and kick off the most successful run that anyone has ever had in the world of professional wrestling. With Mike Tyson as the guest enforcer Stone Cold beat Shawn Michaels for the WWE championship on March 29th 1998. This moment for me is easily one of the top Wrestlemania moments and another example of a hard working individual who gained the success they truly deserved.


5. HOGAN HULKS UP ON THE ROCK WRESTLEMANIA X8 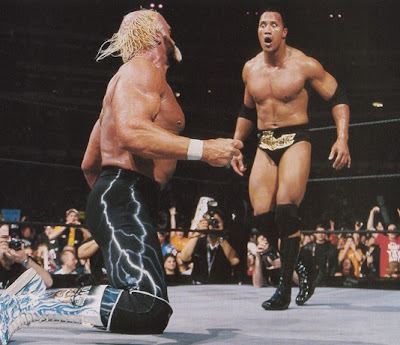 So Hogan headlined the first 9 Wrestlemania shows before ending up in WCW in 1994 to find even more financial success. The WWE took a while to recover from losing most of their top stars to Ted Turners WCW but once Stone Cold and the Rock became established the WWE would end up surpassing WCW and even putting them out of business. So in 2002 Hogan made his return and got booked against the Rock at the biggest show of the year at the Toronto Sky Dome. Hogan went into the match as the heel and the Rock was the face. However the crowd did not care about who was face or heel all that they cared about was the fact the Hulkster was back in a WWE ring and at Wrestlemania the show he pretty much carried on his back for the best part of a decade. The fans booed the Rock and cheered Hogan and the minute Hogan Hulked up the place exploded. Hogan would end up losing the match but would end up getting one more run as the top guy for a months after this event. This moment was proof that Hulkamania will always live forever within the hearts of the fans all over the world.


4. THE UNDERTAKER VS SHAWN MICHAELS WRESTLEMANIA XXV THE WHOLE MATCH 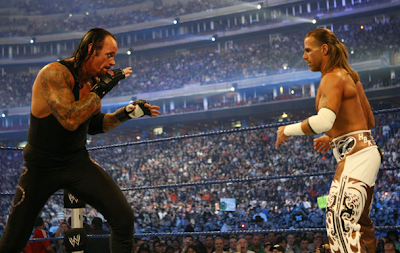 The Undertaker vs Shawn Michaels at Wrestlemania XXV is easily up there as a contender for the greatest match of all time. From start to finish HBK and the Undertaker told an amazing story using their bodies and souls. In a match full of near falls, reversals, high impact moves and also an extremely worrying moment when the Undertaker landed on his head after diving over the top rope to the outside, this match had it all. This match is the closest you could get to being strapped into a roller coaster from your own living room. The two would have a rematch a year later which was another amazing encounter but didn't have the same kind of magic the previous match had. 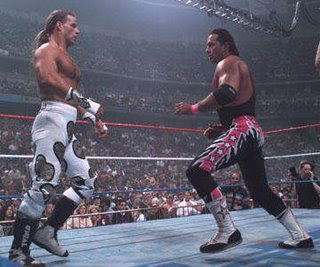 At Wrestlemania XII in 1996 Shawn Michaels and Bret the Hitman Hart went toe to toe for an hour (and even into overtime) in the first ever Iron Man match. When you think of an hour long match you immediately think "an hour? this is gonna get boring after 20 minutes" but this was not the case at all. Shawn Michaels and Bret Hart wrestled one of the greatest matches of all time which had everyone on the edge of their seat. The WWE have had a few Iron Man matches since then but none of them have ever matched up to the classic encounter from Wrestlemania XII. For 2 guys to wrestle each other for an hour solid and still keep things fresh is just a great testament to how great Bret and Shawn really were at what they did. 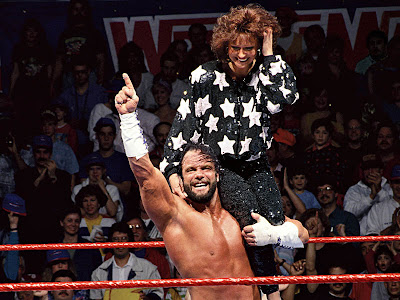 I will be the first person to say that romance story-lines and pro wrestling don't mix. However at Wrestlemania VII Macho Man and Elizabeth captured the hearts and emotions of everyone who watched. So Savage has just lost the career ending match against the Ultimate Warrior which was an amazing encounter. Sensational Sherri starts putting the boots to Savage when Miss Elizabeth decides she has seen enough and leaps over the guard rail to save her ex boyfriend. After that Savage and Liz embrace and the whole crowd goes nuts with tears and cheers. I think another reason why this gets me emotional is the fact that Liz and Randy are no longer with us. Savage and Liz would tie the knot at Summerslam 91 only to have their wedding reception fucked up by the Undertaker and Jake the Snake Roberts.


1. THE ULTIMATE WARRIOR RETURNS TO SAVE THE HULKSTER AT WRESTLEMANIA VIII

Like I said at the beginning of the article this list is about moments which made me lose my shit and go berserk while watching Wrestlemania. So I am 8 years and watching Wrestlemania 8 on Sky TV and I am pretty bummed because the Hulkster is retiring (well so he said at the time anyway) and his last match is against Sid Justice. Hogan drops the leg drop and Sid kicks out and Papa Shango makes his way down to the ring and the two of them start kicking the shit out of the Hulkster. At this point I am enraged as I dont want to see my hero get treated this way especially in his last match. Bobby the Brain Heenan then says "Beefcake cant help him Hogans not got a friend left.." then DUN DAH DAH DUN DUN DUN DUN "ITS THE WARRIORS MUSIC!!!". The Ultimate Warrior sprints down to the ring and cleans house. I was a massive Hulkamaniac but I was always a Warrior guy and still am. Being 8 years old and watching this live was one of the greatest things I had ever seen.