THE MAKING OF THE BOOTLEG SUPER SECRET WARS 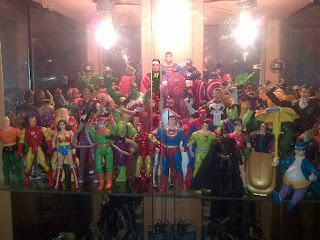 The Bootleg Super Secret Wars are finally over and available to read for FREE online. I can easily say this has been one of the most fun and rewarding projects I have ever undertaken since opening Lost Entertainment.

I got to play with some of the coolest action figures ever made and it was still classed as "work" (god I love this job).

How did it all start you may ask? Well to start with I would have to say a few action figures and a big bag of weed were fundamental elements which got the ball rolling. 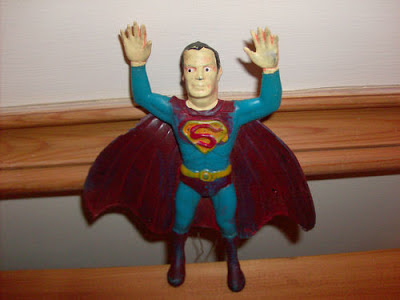 Although they were key elements the main catalyst for it all started when I purchased this shitty bootleg Superman figure from ebay. I wrote about this little guy in this previous Lost Entertainment article (click here to read) a few months back. When I was a kid growing up in the 1980's all I ever wanted was a Superman figure and I could never find one anywhere. The only thing I could get was this shitty bootleg rubber Superman doll from the Roman Road market in East London. The only DC figures around were the Batman ones and Aquaman. They sold Lex Luthor in the UK just to piss me off (I think). You might have been able to get a Superman from somewhere else but all I know is that I couldn't get one.

So recently on ebay I was surfing round buying shit I don't need like usual, when I saw this guy and all the memories came flooding back. I won him and he arrived a few days later. After he arrived I grew quite fond of him and almost pitied him in someway (just like Mr T) as he looks like a zombie but he does have a certain kindness in his eyes. 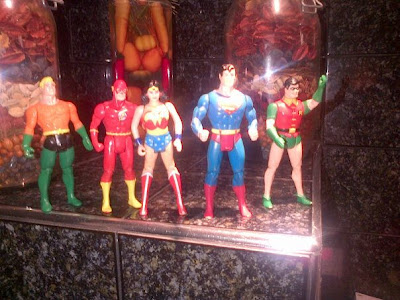 Soon after I got lucky and won an auction on a set of DC Super Powers figures and finally got the Superman toy I had always dreamed of along 4 other amazing figures. It was around this time I got the idea to make a photographic novel about these guys for the website. I decided that as I had grown fond of the bootleg Superman I was going to give him his own 5 minutes of fame and make him the star of the show. 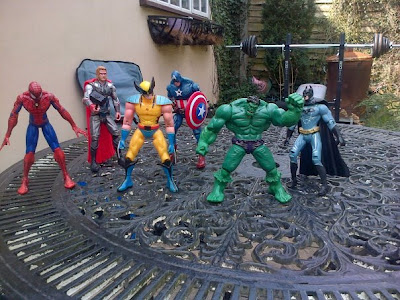 To make the comic work I would need more figures and thats when the evil bootlegs were brought in. This bundle of figures is very common on ebay at the moment and can be picked up for £10 or above. In the picture these look like great action figures but up close they have dodgy painted crossed eyes and lasers on their chests for no fucking reason what so ever. I decided that these evil clones would have the same powers as the real heroes they represent and the laser chests would also be a key factor.

These guys would also need a leader and I used a mini Joker from the Dark Knight action figure collection. I also decided we need a jail so I built one in a book shelf and placed all my adult marketed figures in there like Tony Montana, Jason Voorhees and all the other bad guys from the movies. 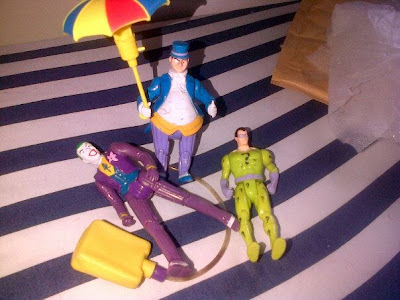 During filming I got lucky again with some original official DC villains in a set and decided to replace the Dark Knight Joker with the original Joker toy from 1989. The el Hulkio figure was found when I helped some friends decorate their kitchen and found him down the back of some kitchen units. El Hulkio is one of the most powerful bootleg figures I have ever seen. Hulk Hogans head with Batmans cape along with an armoured chest, this guy was top villain materiel. 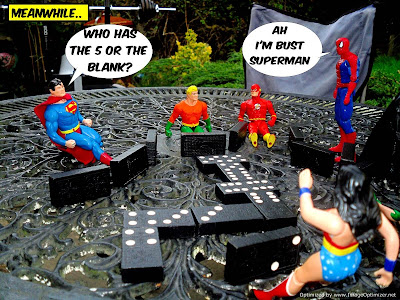 When I first started shooting there was really no plan whatsoever. All I knew was this was going to be epic and Bootleg Superman would save the day in the end. From unboxing Bootleg Superman to the super heroes chillaxing playing dominoes, there was no plan at all. The story simply came to life on its own and pretty much wrote itself. Seeing as this was my comic I decided that this was my universe where anything could happen and anyone could turn up.

I think that was most of the appeal with this run that anyone could turn up and anything could happen. 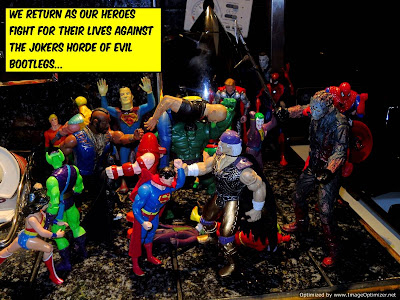 The final battle took the longest to shoot and was shot on the cooker of my kitchen. This shoot took up like half a day , because with each shot every figure had to be rearranged in different poses to make it look more realistic. 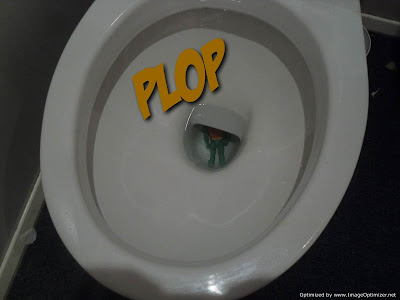 The Aquaman figure which ended up in the toilet was in fact a stunt man! Yes its true I could not bring myself to toss my recently purchased Aquaman down the pan so I used a broken spare I had laying around in the store. How Hollywood is that? 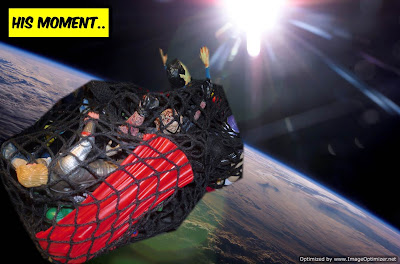 The editing of the comic was the longest and most time consuming of the entire project. The speech bubbles and other shitty special effects took forever. Not to mention the actual uploading of the comic online as well was a real pain in the ass.

So what next? Will there be another? The answer to that is there will be a sequel on its way but this time round has been pre written and cast. I am not going to give away anything but I can show this as a taster; 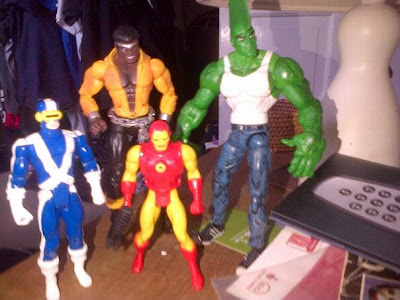 Thank you to everyone who read and enjoyed my shitty online comic!