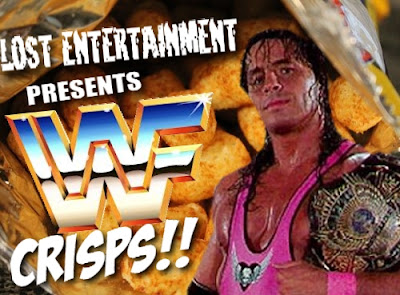 So it's 1993 and things are starting to wind down in terms of the (then) World Wrestling Federations popularity. Hulkamania was done, The Ultimate Warrior fucked off back to parts unknown and Randy Savage had also stepped down. The WWF at this time was being led by Bret The Hitman Hart. A phenomenal wrestler in the ring but lacked the charisma and showmanship that we had been accustomed to.

At this time the WWF were really digging deep in the well when it came to creating new talent and ideas. We had clowns, repo men, tax inspectors, bull fighters, ex convicts, sumo wrestlers, alligator hunters, voodoo priests and Max Moon (what ever the fuck he was!).

The ratings and ticket sales dropped week by week and with a huge impending law suit over the steroids scandal this was a very dark and testing time for the WWF and for the wrestling industry in general.

However that did not stop them from making and marketing even more stupid products. Since the 1980's the WWF has marketed and sold every type of product imaginable. Be it hats, t shirts, toys, bed spreads, posters, badges, even more toys and anything else they could slap a WWF logo on at the time.

I remember being at primary school in the January of 1993 and one of my friends running into class to show everyone the coolest thing we had ever seen, The WWF Superstars crisps from Red Mill. Word spread like wildfire of these crisps that had the Undertaker on the packet. At lunch time another kid lucked out and found a bag with Randy Savage on in his packed lunch and pure chaos commenced.

I am not exaggerating when I say pure chaos started over these crisps, everyone was literally losing their shit. Everyone had gone off the WWF just after Survivor Series 92 but I was still a loyal fan who had faith in Hulk Hogan coming back and making everything great again. These crisps however made the WWF topical and cool again among my classmates, which was great news for me, as up until this point I was defending the business everyday when those other idiots were calling it "fake" and "rubbish".

So lets have a look 20 years on at the WWF Superstars Crisps by Red Mill. 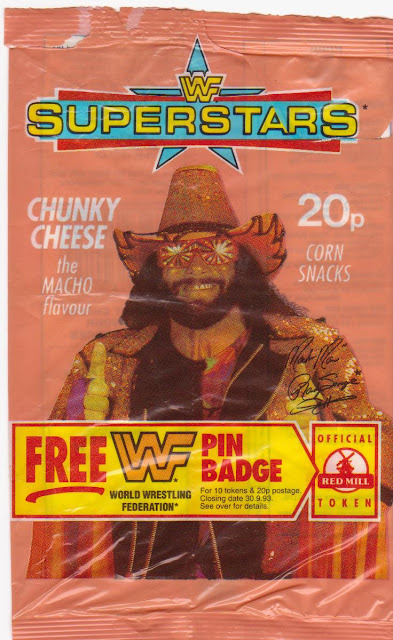 So this is the Chunky Cheese flavour which claims to be "the macho flavour"! Out of all the flavours to represent the extravagant Macho Man Randy Savage I would have to say that this one is in the right ball park. Then again Macho Man could be any flavor he fucking wanted as he was that cool. These were 20p at the time which was 10p more than Space Raiders and 10p less than Walkers crisps at that point in time. You got a decent bag of crisps plus a picture of Randy Savage, what more could you want? Well a lot but still. 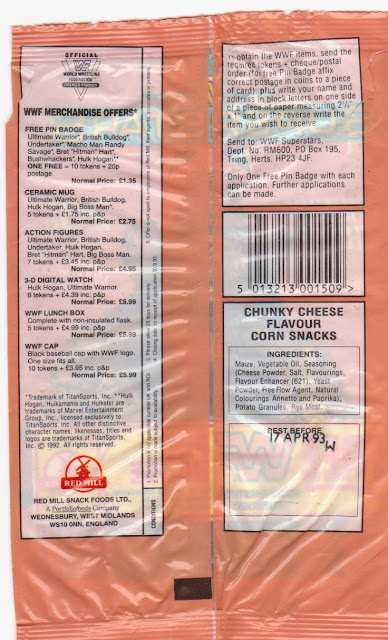 On the back of the packet there are some prizes you could win if you sent off enough tokens off the crisp packet. The funny thing about the prizes, is the fact 80% of these products are products of Hulk Hogan who had left a year before and the Ultimate Warrior. Up until signing with WCW in 1994 the WWF would continue to sell products with the Hulks image on.

Another funny thing is that every time Hulks name got mentioned up until 1996 a Marvel copyright warning would come up. Although there never was a Hulk Hogan comic, Marvel did not take too kindly to Hogan using one of their top characters as his name. When Hogan first came on the scene he was dubbed "The Incredible Hulk Hogan" so to get out of any legal bother Vince Mcmahon Sr struck a deal with Marvel and gave them the rights to his name. This turned out in Hogans favor in the end, as he could continue being the Hulkster after leaving the WWF in 1993 until he became Hollywood Hogan in 1996. In 2005 he finally bought out the name and it now belongs to him. The sell by date on these crisps is the 17th of April 1993. From what I remember they did not last that long before being pulled off the shelves and never seen again. 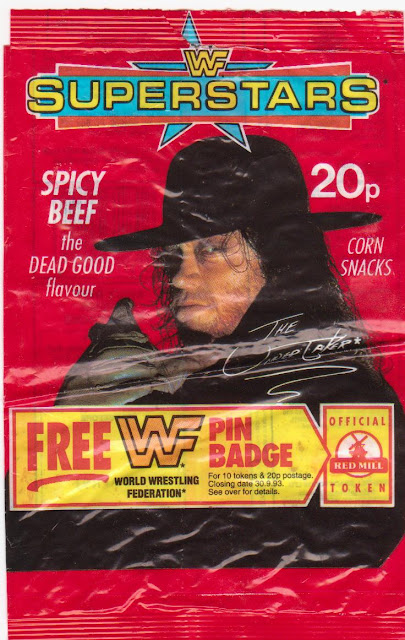 Everyone knows that when it comes to corn puffed crisps, beef will always be king. That's why it is so fitting the Undertaker got this flavor. The Undertaker is the don of dons and still even 20 years on, the dead man is kicking serious ass in the squared circle.

At this time the Undertaker had been a face (good guy) for just under a year. The transformation from being the scariest heel (bad guy) in the business to the Frankensteins monster (with good intent) happened over night. As a heel the Undertaker took apart all the main top boys including Hogan and The Ultimate Warrior. As a face the Undertaker served as a monster who would destroy other monsters on the roster such as Kamala and the abysmal Giant Gonzalez. Things would stay this way up until he won the belt again in 1997 at Wrestlemania 13. I remember this flavour being the best one. 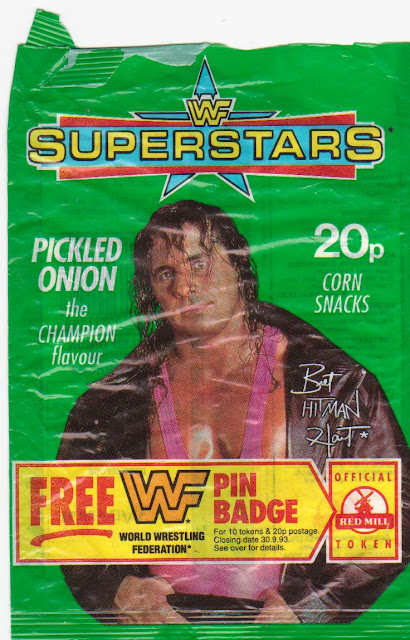 Finally we come to the Champion Flavor which was pickled onion. I would have had Bret down as being a prawn cocktail flavor just for the pink packaging alone.

I was never a huge fan of the Hitman when I was a kid! Not because he sucked or anything like that, I just didn't like the fact he had Hogans spot. The fact that I really wanted the Warrior or Randy Savage to be the guys in the top spot when Hogan left was a major factor for me not liking him. So when Bret became the main guy I instantly resented him for it. I think alot of young fans felt the same and Bret had a very heavy load to carry for the next 4 years.

These crisps vanished off the shelves not long after and it was as if they never existed, making them another Lost Entertainment gem! The WWF would fizzle out until 1998 until the attitude era began. Red Mill was a company under the umbrella of Golden Wonder and was purchased by a company called Tayto in recent years.
Posted by Kris Rodriguez