M.U.S.C.L.E which stood for "Millions of Small Creatures Lurking Everywhere" was a hugely popular line of toys from Mattel in the late 1980's. The toys were made from a PVC gum and were of small wrestlers which ranged from humans, aliens, monsters, robots and brick shaped creatures. There was even on of a giant hand which looked cool but made no sense what so ever.

The figures came in packs which were boarded on cards or in a mini bucket. These toys were ultra popular and were used as currency at my primary school for a short period of time before they vanished off the face of the earth. These inch and a half unpainted toys were really cool and the fact that there were so many variations made these very collectible. 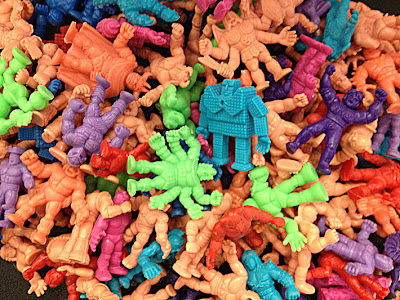 As time went on Mattel went on to release multi colored variations of these figures. Although it kind of breathed new life into the franchise they were no way near as good as the original flesh colored flesh colored counterparts.

A wrestling ring for the figures was released as well as a championship belt which you could display your top figure in (kinda like the AWA one for the REMCO figures click here to read about them). The line although hugely popular for a few years died out just before the 90's began. I collected them all up until that point and was only missing a few. The figures are hugely popular among collectors to this day and you can purchase ones you haven't got by going to this website (click here).