MOVIES:MARK OF THE DEVIL (FULL MOVIE INCLUDED FOR SHORT TIME ONLY) 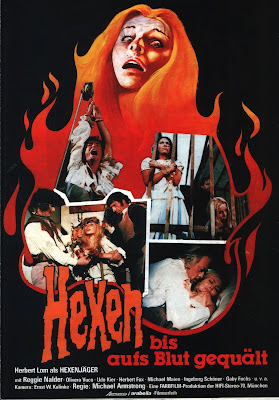 Mark of the Devil (Hexen) is a Austrian horror movie from 1970. This past weekend me and a friend had a few joints and sat down and watched this movie.

The movie is about a Witch Hunter who arrives in a new town to take over the proceedings when it comes to burning and torturing women for no good fucking reason.  The movie is a cash in on the Witchfinder General movie with Vincent Price from 2 years before. This movie was released with the purest intention to shock audiences and not much else. This was evident to the extent that free vomit bags were handed out to audiences that paid to see this movie in US theatres. The movie was also rated "V" for violence as a nice little touch as well. 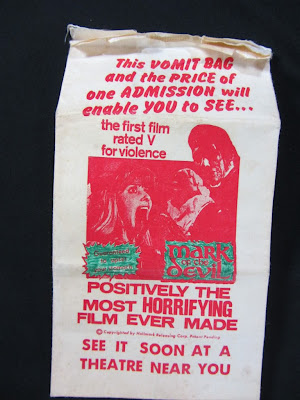 Barf bag from The Mark of The Devil. These are highly collectible on ebay. 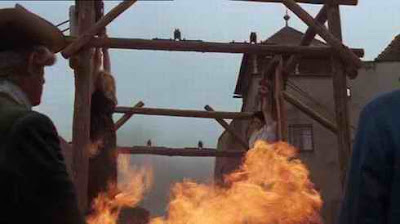 The movies main focus is on the graphic and brutal torture of the accused witches, which even if the effects are a bit dated, they are still quite heavy to watch. Women get stabbed, stretched, burned and some nuns get fucked up and that's just for starters. 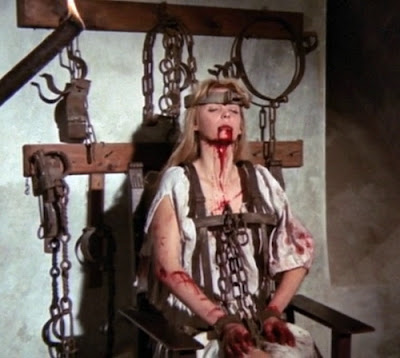 The movie has a dubbed over soundtrack which is very amusing at times and the over the top sound editing brings lots of comical value. The movie has plot holes and continuity issues which are very evident almost everywhere. For instance, in one scene a woman slashes a mans face with a knife only for his scar to disappear in the next scene and then magically re-appear and the next. 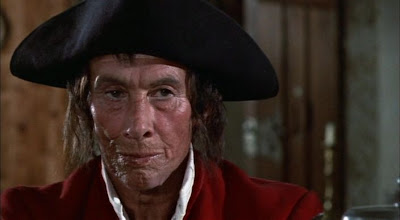 The movie is very anti climatic and it really seems as if they are just fleshing the whole thing out so that the movie doesn't just consist of violent torture scenes. The movie has its fair share of laughs but I am sure most of them are not intended. One great scene of note is when the witch hunters bust in on a kids puppet show and believe the puppets to be instruments of the devil. 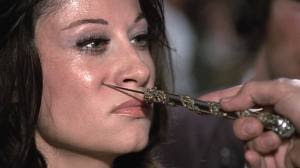 The movie really focuses in on the corruptness of the holy church and shows just how severe the lengths the simpletons of the olden days would go in the name of the "lord". Although the movie tends more to exploit violence against women by using all these cool torture gimmicks they had laying around on the castle set.

This movie isn't the best and hasn't aged well in the modern times. What was shocking and down right appalling in 1970 is damn near laughable in 2013. With that said this isn't the worst movie either. It has good costumes, cast members and great use of locations but the main let down is no story arcs or any real structure the whole way through. What should happen and what does happen are two different things. If you want to watch a decent movie on the subject of witch hunting then Vincent Price is your man in Witchfinder General. This one is just for gore, giggles and not to be taken seriously.