So Todd Mcfarlane who created Spawn and drew up some of the coolest comic books of the 1990's started his own action figure company up in the end of that decade. Mcfarlane Toys is one of the most innovative and important toy companies to ever emerge. This toy company brought us articulated action figures which were sculpted with the highest quality resin molds. Nothing like these figures had ever been seen before when it came to the levels of detail.

The thing that set this company apart from the others is the fact they made toys which were marketed more towards teenagers and adults than young children.

In 1998 this company launched a line of figures based on characters from horror movies. This line of figures was called Movie Maniacs. The first series consisted of 5 different figures 3 of which being some of the biggest (and bloodiest) names in horror. This line of toys did so well that another 6 lines of these toys were released and other companies started to take note and make similar toy lines them selves to much success. 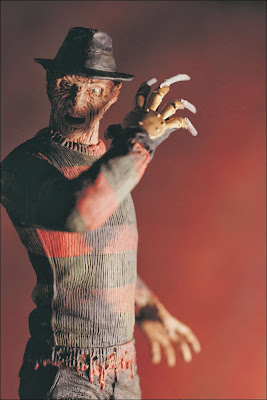 Me being one of the biggest self confessed Elm Street fans on the planet this toy was the one which excited me the most when this line was first announced. Apart from resin models you could buy this was the most detailed Freddy Krueger figure ever made at the time and came with Phillip's Freddy puppet from Nightmare on Elm Street 3. The figure has 7 points of articulation and the hat doesn't come off which is a real shame. Out of all the figures released in this line this is the clumpiest of them all. The sculpt of the glove is not that great either but it's a first attempt so can't be too harsh about that.There have been many improved efforts of Freddy figures since then by other companies and Mcfarlane even released an improved Freddy figure in a later series of the Movie Maniacs line a few years later. 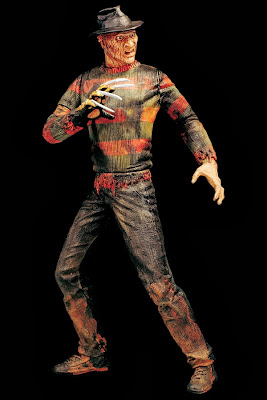 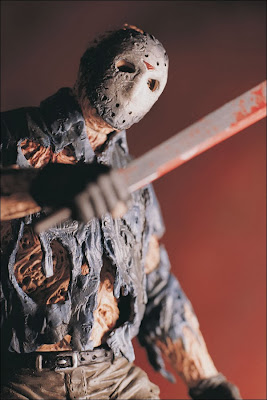 Jason is hands down the best figure of the bunch. He has many points of articulation and comes with lots of weapons including, a machete, an ax and a sickle. These weapons were painted in a reflective metallic paint which made them look ultra realistic. The figures mask came off if you carefully cut it off with a graphics knife and had the horrific facial features as well. This however does devalue the figure and yes I know this because I did it. I would also like to point out that these figures were all sold in 2 different variations which were clean and blood soaked. I have never seen an un-bloodied figure from this line in real life before. 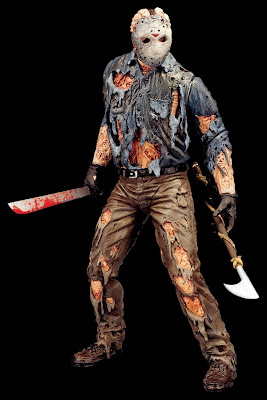 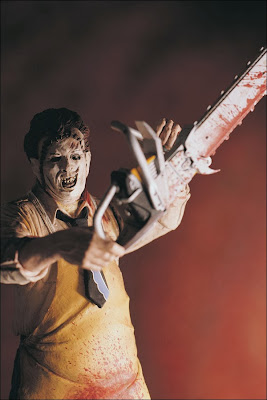 At the time of this figures release the Texas Chainsaw Massacre was still banned in the UK making this one all the more cooler. I remember being so shocked that an action figure of Leather Face had actually been made. Leather face is a big heavy figure and comes with lots of gory goodies including his trusty chainsaw, a bucket, a hammer and various limbs including a decapitated head. The figure has a great likeness and is a great first effort. 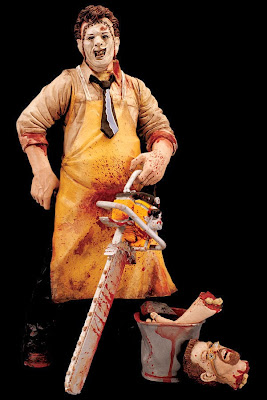 EVE AND PATRICK FROM SPECIES II 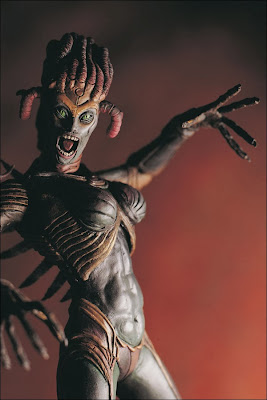 I have never seen the Species movies (just never got round to it) so I cant really comment too much about these figures. These are pretty obscure entries for the series when you consider the first 3 figures in the line. Mcfarlane would do things like this throughout the line over the years putting figures like Shaft, Robocop and Sarah Connor from Terminator 2 in lines with other horror movie maniacs figures. The figures them selves look really nice and are good sculpts but like I said I haven't seen the films or own the figures to make any real comments about these guys. 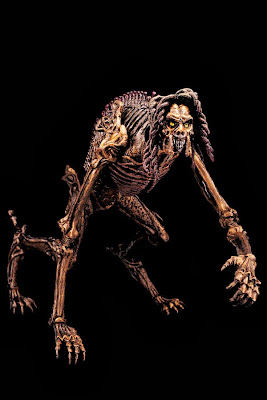 All the figures came with dioramas made from bones and a cardboard version of the movies poster framed inside. I will be reviewing the latter lines of these figures as I go on in the future so stay tuned. In present time there are lots of different companies like NECA and sideshow collectibles which have some amazing horror figures on sale. However the movie maniacs are the ones which started it all and set the bar when it came to making horror movie related toys.
Posted by Kris Rodriguez