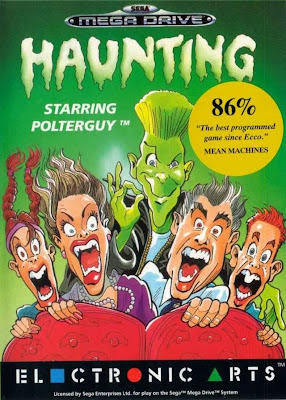 Oh yeah it's that time of year again! The time of year when things go bump in the night and the weather turns to shit.. of course Halloween! As always Lost Entertainment (dot org) will be celebrating this event by posting articles about creepy shit up until the 31st of October.

So this year we kick off the Halloween countdown with a review of a rather obscure Sega Megadrive classic called Haunting starring Polterguy. The game was created by Electronic Arts in 1993 and I never got round to playing this until 2011 on an episode of GameRape, when me and Squid played the game with commentary.

The game was a top down isometric style video game which really resembles the first outing of the Sims which EA would release 7 years later to much success. The plot of the game is very simple, a dead teenage punk rocker is going round terrorizing a family of yuppies from house to house for no good reason. There maybe a reason for this but I never found one while playing it. Maybe the dad raped him while the others watched and laughed or something? Either way this guy is pissed off and he will go to any length to torture these poor fuckers from room to room.


The main character is invisible to the residents of the house and in order to scare them he must dive inside of the objects and furniture placed in each room. Once this happens and the intended victim interacts with that object something dreadful happens. For instance: when you make the Polterguy dive into the sofa and a person interacts with that object, the sofa turns into a giant monster and tries to eat them. 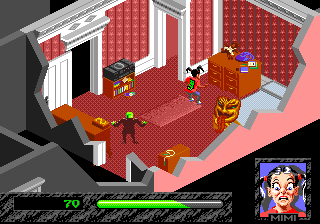 The more haunted items you make them interact with the better and if you frighten them enough they will leave the house. You have a green meter which represents your plasma and you need this in order to jump in and out of the objects. Residents will drop large amounts of this if scared enough so you can replenish it, but this meter will always run down no matter how well you are doing. 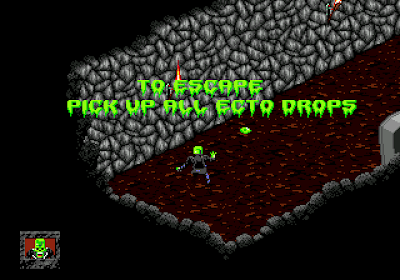 Once your plasma meter has completely depleted you will be sent to the underworld level to collect more. This is the only place in the game where you can take damage and this comes from grabbing hands from the walls and mist clouds from the floor. This is the lamest part of the game and really slows down the fun which flows pretty well up until this point. 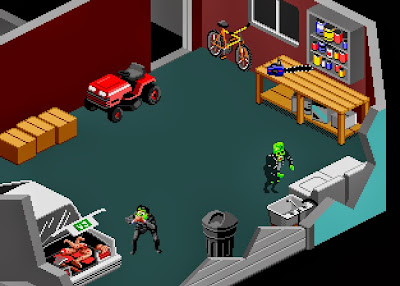 Being a Sega Megadrive game this one cashes in on the fact that blood was allowed on this system at the time. There are lots of gory and very graphic tricks you can play on the members of the house hold. Once you make all the residents leave the house you then follow them to the next one and do this four times all in all. 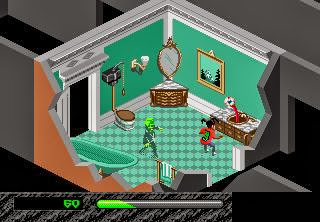 The levels get trickier as they go along but this game is very pot luck when it comes to difficulty due to the primitive AI for its time. Sometimes you can make a house member flee just by doing one or two things and other times you can scare them 30 times in one room and they wont even flinch, so it's really down to their mood wether you succeed in this one. The final boss in the game is the family dog which turns into a big beast at the end which you do battle with. 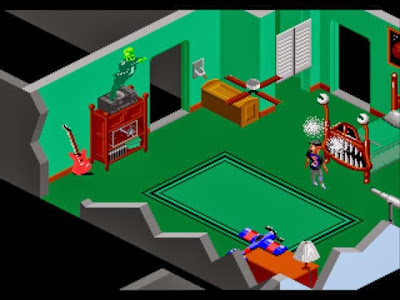 The game is good fun to play and has aged quite well. The only downfall is the bad AI and the constant visits you make to the underworld which break things up somewhat. On a whole though.. not bad at all! Below is the GameRape episode in which me and Squid played this game in 2011.