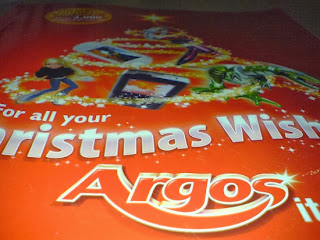 Yes it's that time of year again! I haven't seen any Coca Colo trucks yet as I don't want much normal TV anymore (because its dog shit poor), but I have been told by someone who watches TV that its happened so I took their word for it.

Retro Argos catalogs are a big deal on Lost Entertainment and are the closest thing to a time machine you can find. Today we will be looking at the Argos Christmas catalog from 1993. Its not a big book and we will only be looking at the kids section. 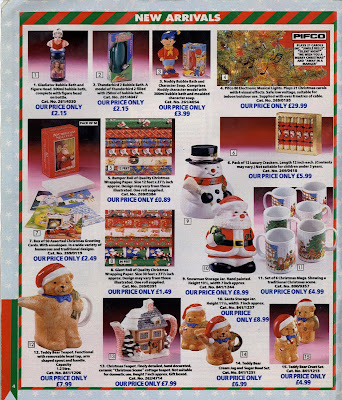 So this page has some bubble bath bottles at the top which are themed on TV shows. There's a Gladiators one with a sticker of jet on the side and the lid is a molded Gladiator head which is awesome. I will be reviewing my Christmas gifts from 1993 and Gladiators plays a big part. There's also a bubble bath bottle shaped like Thunderbird 2 and a noddy one as well. I heard a funny joke about Noddy recently which really made me laugh. Why does Noddy have a little bell on his hat? Because he's a cunt!

This page also has some musical fairy lights wrapping paper and other generic Christmas items. 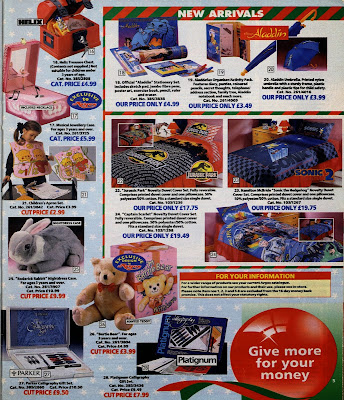 On this page we have some interesting stuff. The slogan on the bottom right hand side doesn't read very well to me. Surely it should say "get more for your money" instead of give? Oh well fuck it who cares apart from the internet spelling police.

On the top left hand side there is a Helix Treasure Chest which has a funny "contents not included" added on the side to make them bullet proof if a kid tries to sue them for not including the shitty Sonic the Hedgehog watch pictured inside of it. One of my friends still has one of these to this day and I have no idea what he keeps in it. One day I will find out and tell everyone.. if its something valuable I will just steal it or something.

On the top right we have Aladdin stationary sets and an Aladdin umbrella. Aladdin was the huge Disney movie from 1993 and was loved by both girls and boys so the toys and merch did very well that particular Christmas.

Now on to the bed sheets and we have some really cool sets to talk about. First up there's the Jurassic Park set which is just plain awesome. I have talked about the merchandise from this movie in many different articles on this site before. If you look on the side table by the bed you will spot the Kenner T-Rex and Raptor action figures.

There is a Sonic the Hedgehog 2 bed set as well. Sonic 2 was released one year before but was so awesome it ended up becoming a leading Christmas gift one year later as well.

There is also a Thunderbirds bed sheet set as well. Thunderbirds made a huge comeback during the mid 1990's and new versions of the toys and vehicles were released.

There's some calligraphy pens and a rubbish teddy bear thing on offer as well. 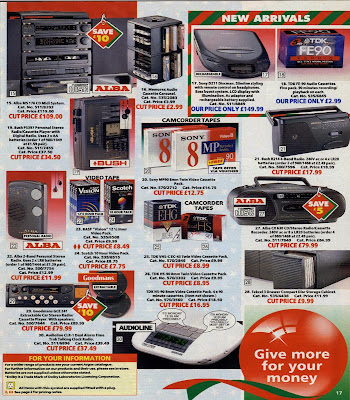 This page is filled with the top of the range Hi fi and electrical entertainment equipment. Here we have a portable CD player which is the most expensive thing out of the lot. A portable CD player from this era would not have the shock resistant feature and would skip more than Rocky Balboa on speed. So a £149.99 would have been a bad investment. There's lots of blank tapes and a talking alarm clock which says the word "precisely" quite a lot. 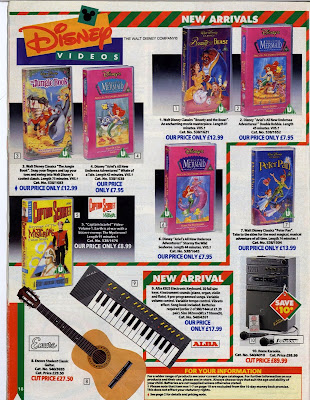 On this page we have some Disney VHS cassettes, a keyboard, an acoustic guitar and a karaoke box. Yeah that's all I can say about this page. 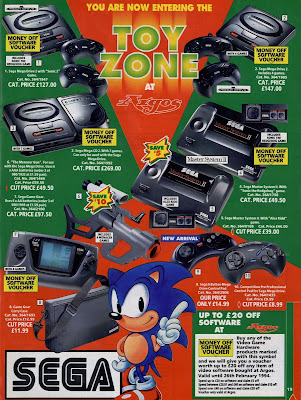 OK Now we are talking! A whole page dedicated to Sega products from 1993. So we have the Sega Megadrive 2 which was the exact same as the Megadrive only it had red buttons on the console instead of switches. The console came with Sonic 2 and was reasonably priced at £127. There's also a deal with 4 games included to the right.

Underneath we have the Sega CD system which is £269 and was one of the biggest flops in gaming history. This piece of equipment clipped onto the Sega Megadrive and played CD games. The games however were complete dog shit and consisted of long badly acted out cut scenes, which then turned into even worse computer games. I remember laughing so hard at some spoilt kid who got one of these for Christmas the same year.

I got the Sega Game Gear a year before as my main Christmas gift and was still playing it around this time. The Master systems are still on sale in this book and going for a good price. The six button joypads were popular at this time as Street Fighter II had just been released on the Sega Megadrive. As the Megadrive only had 3 action buttons this did not work very well for that game and they had to invent a new controller for it.

The Menacer light gun just like every other light gun was just a pure gimmick which only worked for a handful of games and sucked when it came to working properly. 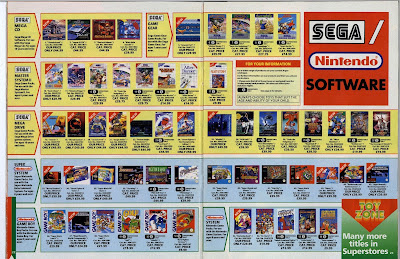 Now this is the last page I am reviewing as the rest of this book is full of girls toys and I don't review those. On these 2 pages we have all the video games that were on sale in December 1993. There are some of the greatest video games EVER made on these pages and they were fucking expensive. Now I mentioned Street Fighter II making its way to the Sega Megadrive console and this is the most expensive game in the book at a whacking £59.99!!! Its hard to imagine someone paying the best part of £60 for a game we can download online in a matter of seconds today, but it happened. Its almost poetic justice when the pirates started making money from illegal gaming a few years later. These prices in 1993 are fucking extortionate and they knew that they could charge it because parents are not going to ruin Christmas 1993 for their children by not buying them Street Fighter II. If you got this game for Christmas in 1993 you should go and find your parents and hug them because that was a lot of fucking money back then and even more now.

There are some awesome games on this page such as Super Mario World, Mortal Kombat, Jungle Strike and Aladdin just to name a few. I also spotted Bubsy here for a whacking £39.99 I wouldn't even pay 1p for that game and would probably take a dump on the box out of protest. I hate that game because one of my friends got it for Christmas 1994 and we spent almost the whole of 1994 trying to get past the first 3 levels. It was soo hard beyond belief and sucked so bad.

The Nintendo Entertainment System is holding on by its claws at this point on the bottom right hand side of the page. Poor old NES.
Posted by Kris Rodriguez