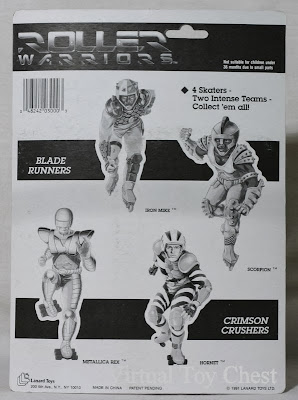 Today I go back to 1991 and re-discover a set of action figures I loved when I was a kid, The Roller Warriors from Lanard Toys. Lanard Toys was a small toy company from the 1990's which made these and about 3 other lines of cheap action figures. Their last set of toys were awful Bootlegs of the Mighty Morphin Power Rangers. This line of figures could be picked up at market stalls and small outlets like most bootleg toys and figures.

What made the Roller Warriors so special was the fact they had real roller skates and each figure came with a set of inline roller blades. On the back of the packet it says the figures are members of 2 teams indicating that these maybe sports men? But there's no balls, goals, pucks, hockey sticks etc. so what are they a team of synchronized skaters? If so it seems like Mad Max mixed with Torvill and Dean! The Teams are called the Blade Runners and The Crimson Crushers. There is no back story on the pack indicating who's good or who's bad leaving even more to the imagination.

So lets meet the team members 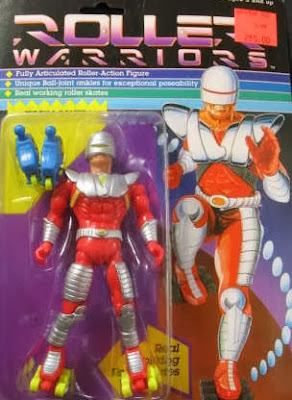 It must be awesome to be a mixture of Robocop and Flash Gordon, whilst having the first name of the biggest metal band at the time and the surname of  the coolest dinosaur ever. This was my favorite toy of the bunch. I must also add that these figures had 9 points of articulation and the arms could be removed and swapped from different figures if you fancied a wardrobe change. The feet popped off as well so you could switch skates. Very Awesome indeed. 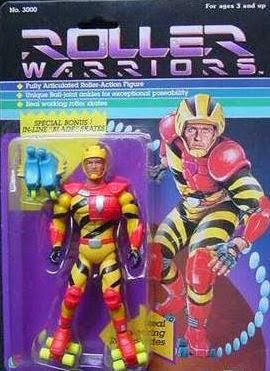 Hornet was the other member of the Crimson Crushers. Donning a very eye pleasing red, yellow black colour, scheme he always seemed the weaker link compared to Metallica Rex, but how do you top a guy who looks like Robocop and first names Metallica? 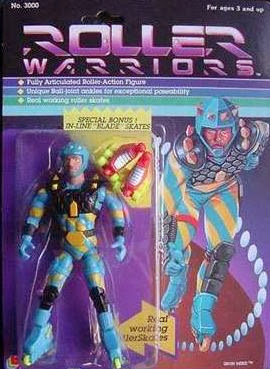 First up for the Blade Runners we have Iron Mike. Iron Mike has gnarly spikes on his attire which instantly makes me think hes a bad guy. But because there's nothing on the packaging to indicate this I don't know what to believe. One thing that annoys me with toy lines like these is the fact they never give you a back story on the packaging. Toys like He-Man figures don't need one because they have a show and kids know who's who and what's what. Here we just have to live in a world of pure assumption. Even the Space Raiders 10p crisps from back in the day had a back story and they were only fucking crisps! 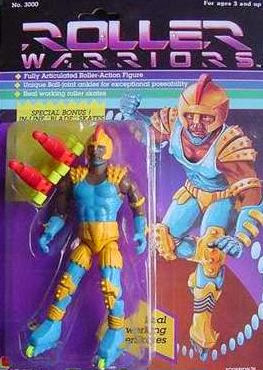 Lastly we have the token black guy figure who is some kind of Neo Spartan or something. This looks like quite a friendly action figure and now makes me think that maybe neither team is good nor bad. Maybe they are proper gentlemanly sportsman from the future. I have no idea what sport it is but I am sure it has something to do with roller skating and not snooker.

Overall I liked these figures as a kid and a couple of them ended up having promising careers in my toy professional wrestling league during the winter of 1992. One thing I really liked was the fact it was easy to collect them all and the fact they had working roller skates.

You can pick these up very cheap on ebay boxed or unboxed. You never know they might turn up in the future episodes of the Bootleg Super Secret Series at some point.
Posted by Kris Rodriguez