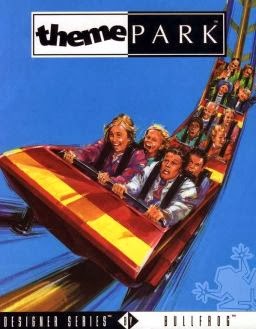 In 1994 Bullfrog and Electronic Arts created a computer game which spread from the PC to all the major consoles, this game was the mighty THEME PARK.

Theme Park was a business and construction simulator and one of the first games of its kind. The game spawned many sequels which upped the graphics, but never could quite capture the magic and charm the original game had.

After seeing this game being previewed on an episode of Games Master in 1994, my main mission in life was to own a PC and own this game. I did not get my wish until late 1995 but it was worth the wait. 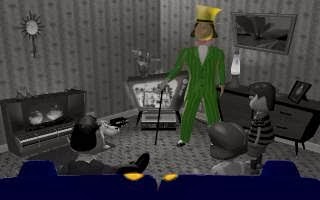 I never forget installing it and being amazed by the opening cut scene (which looks proper shit in 2014) and how good the graphics and sound were. 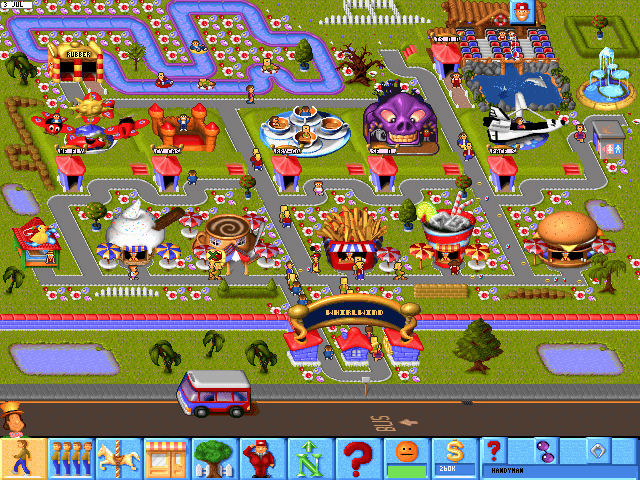 The game was a highly in depth business simulator and a highly fun sandbox creation tool which mixed serious business with tongue in cheek cartoon style fun. 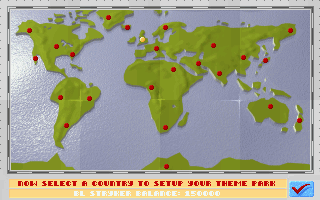 So the game starts out and you enter your name and details into the main menu and you start your journey on the path to world theme park domination. To begin with you get given a free piece of land in the UK and a hundred and fifty grand to spend on building it. The aim of the game is to make a financial success while keeping all of the people that visit your park happy. You do this by giving them rides and amusements that blow their mind, while keeping your park a clean and safe environment by hiring cleaners, security and mechanics to fix the rides when they break.

If you make your park a success you can sell the land on and start up a new park in different locations around the world which vary in size, weather conditions, population and even economy is taken into account. The level of business detail in this game is very high and realistic. The game has its own economy and stock markets in which you can buy and sell shares in yours and others theme parks. At the end of the financial year a screen will come up showing you how well you did against your competitors. 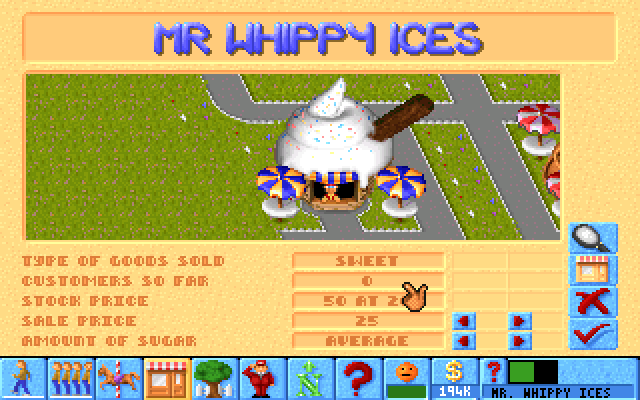 You earn money from ticket sales, merchandise, food and drink vendors and gaming stalls. Prices of all of these can raised or made higher and you can even change probability of the amusements to where no one can ever win. The visitors of the park are not fooled easily though and they will not engage in activities if they become wise to your actions. Another cool thing you can do is change the quantities of sugar and salt in the food and drinks vendors meaning the park visitors will crave other products after trying one that's been modified. The shops and vending stalls must frequently be restocked by going to the warehouse screen. 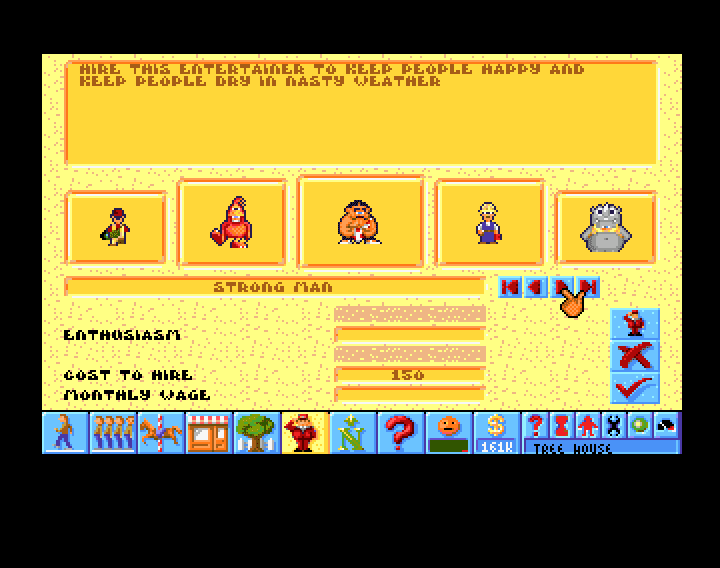 Staff are a very important aspect of the game and a key feature to keeping the park safe and your visitors happy. Due to the fact that roller coaster rides make people sick, its essential to have a few cleaners on hand to clear up otherwise your park will be covered in vomit and litter. Entertainers are needed to keep up the morale by handing out balloons and security guards are needed otherwise bikers turn up and start beating up your guests. I always would go a year before getting security in because the bikers beating everyone up is actually quite funny. Mechanics are essential as the rides do not last very well and will blow up killing everyone on board if left unattended. That's also a blast to watch (literally!) . 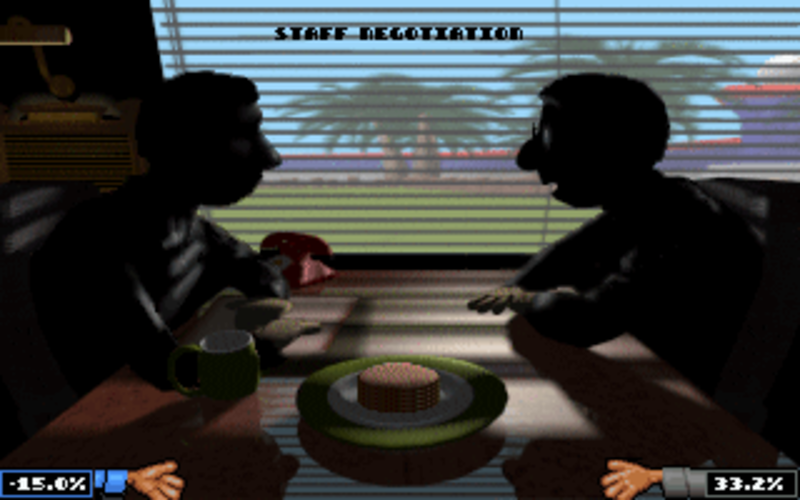 Another cool element the game had was the attention to detail when it came to staff and goods negotiations. Suppliers and staff will put the squeeze on you for more money and its up to you to give in to their demands or figuratively go fuck them selves. Failure to give in to them means staff strikes and closed shops. Its very amusing seeing all the staff in silly costumes walking around outside the park with massive signs on strike. However no staff or supplies means a troubled park and this affects the happiness of your visitors so you kinda always have to give in to these but its still a lot of fun to watch the chaos unfold.

Speaking of chaos unfolding, this is one of the most awesome aspects of the game! There's nothing better than building a cool park, filling it with people and then giving them pure hell. This can be achieved by putting up astronomical prices and changing the speed of the rides to top notch which in most cases causes crashes and sends punters flying through your monitor. In fact its pretty hard to have a park which has no chaos as the game is pretty tough in that respect.

As an 11 year old I loved the creation aspect of the game but hated the financial part and really resented the fact that I always had a park full of puke and unhappy customers. I also hated the fact I could never afford anything decent or be able to build a more than basic park before the game over screen would appear which was a man jumping out of his office window! There's a picture of his wife and kids there as well just for good measure.


Once I found the infinite money cheat I was a happy camper again and spent hours and hours building awesome parks with amazing rides and features. You could then enjoy your park and even go on the rides which would play a little point of view cut scene of each ride which was pretty cool as well. 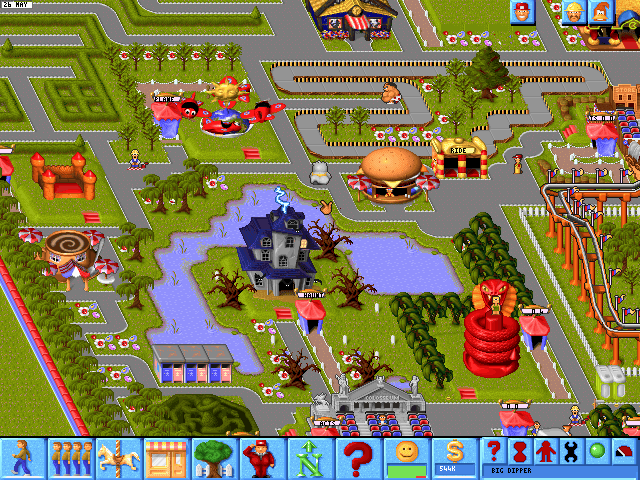 The graphics of the cut scenes are really good but the in game graphics are pretty standard. The sound is pretty awesome but most of the time all you can hear is screaming and people being sick which gets a bit much after a while. 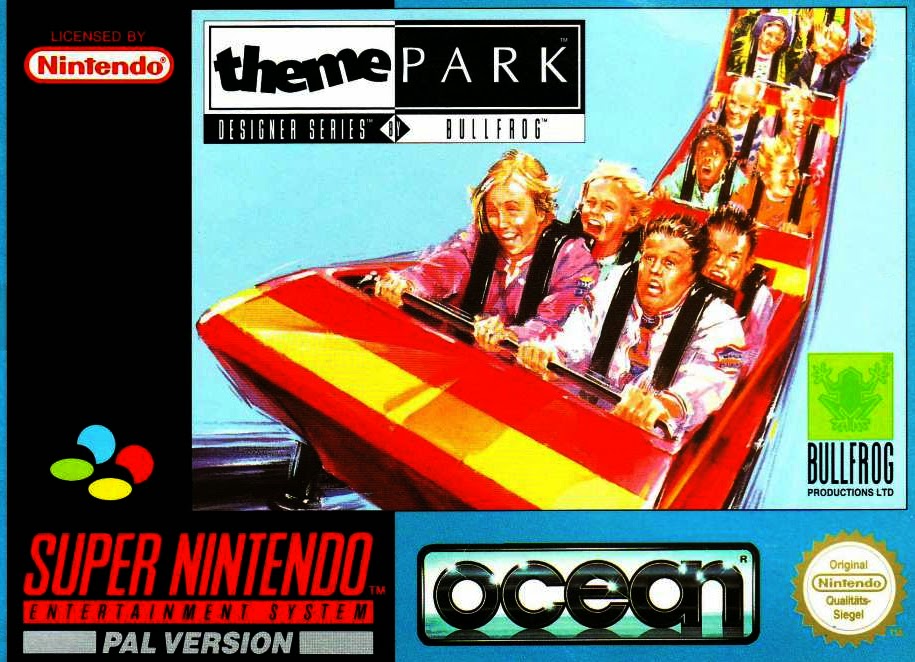 The game made it onto all the major consoles but never lived up to the glory of the PC version. The reason being that graphics and sound wasn't up to scratch and the fact it was a point and click game. The console versions are not shit though they just don't match up to the PC version which will always be a heavyweight undisputed classic when it comes to PC gaming.

The Lost Entertainment verdict is..