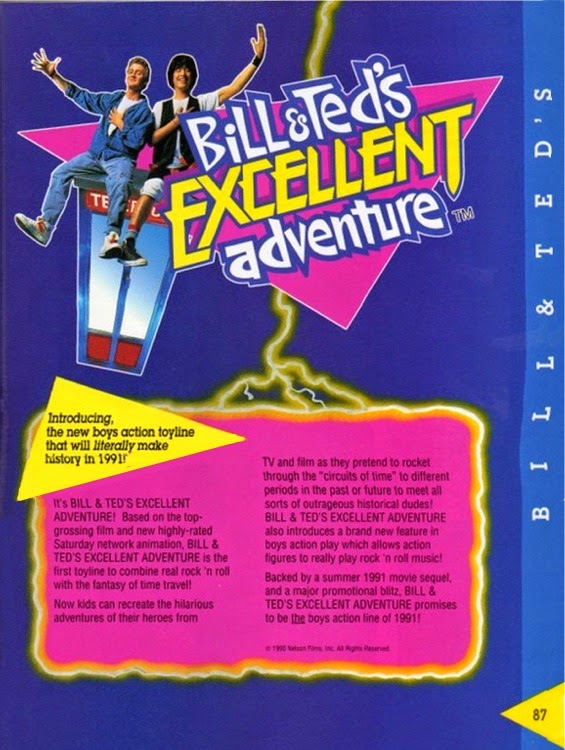 So there's a big rumor going around at the moment that there is going to be a third installment in the Bill and Ted franchise. If Godfather Part III and Indiana Jones and The Kingdom of The Crystal Skull taught us anything, its that when you leave it that long to make a sequel.. don't bother. Anyway this article isn't about movies it's all about TOYS!!

Since making Star Wars toys in the late 70's Kenner have been a power house when it comes to churning out ultra cool licensed toys of popular movies. Kenner released a line of really cool and unique action figures to tie in with the Bill and Ted movie in 1990 which had some awesome gimmicks which actually worked really well. Here's the TV commercial

As many of you know lots of toys make us promises in catalogs and commercials that the toys them selves never live up to. Take the board game Mouse Trap for example, on the commercial and in the toy catalogs we have this board game which is full of amazing gimmicks and ideas that look so fun and awesome. In reality we have a heavily over priced board game full of loads of plastic junk that hardly ever works and takes forever to set up. The Bill and Ted action figures had a lot to live up to. These figures were advertised to play in a band together by squeezing their legs and playing real music. 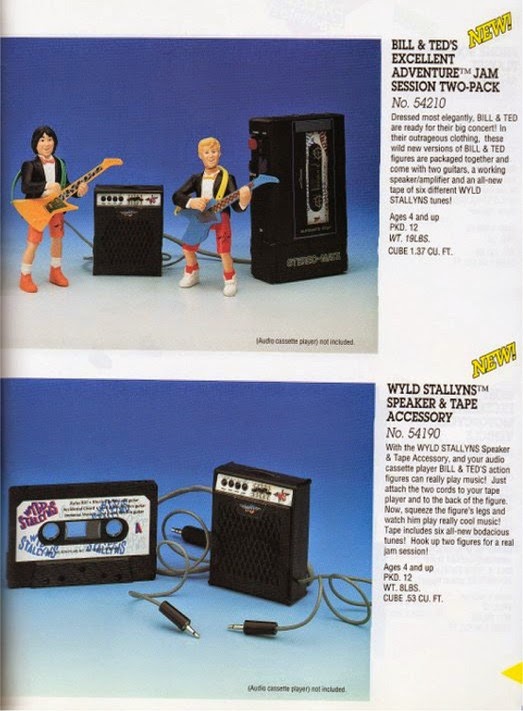 The amazing thing with these toys is that they really were telling the fucking truth! Using a Wylde Stallions cassette tape which when played through tape player and connected to the guitar amp accessory and action figures them selves, the action figures actually played music when the legs were squeezed together. Even to this day I really think that this is one of the coolest features I have ever seen from a line of toys. 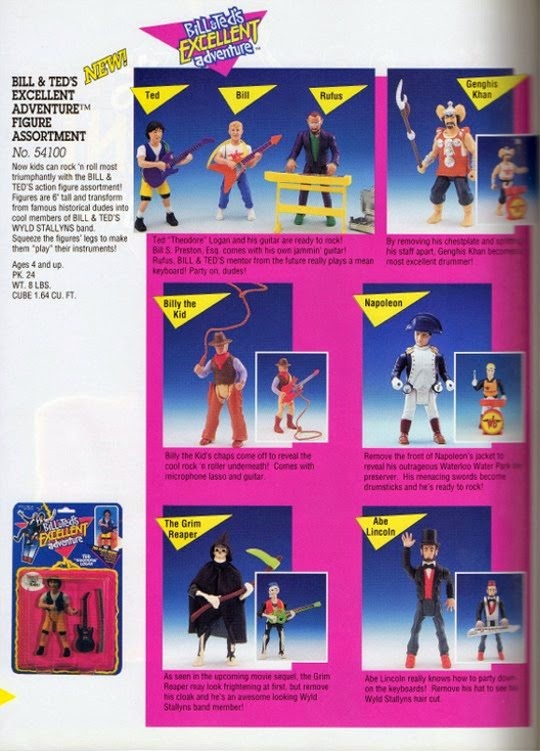 There were many cool action figures to choose from in this line including Rufus, Death, Napoleon, Abraham Licoln and many more. The toys also transformed in the same style as the Real Ghostbusters toys which were also made by Kenner. The toys would transform from their classic historical form into heavy metal rock musicians each with their own instruments and accessories. 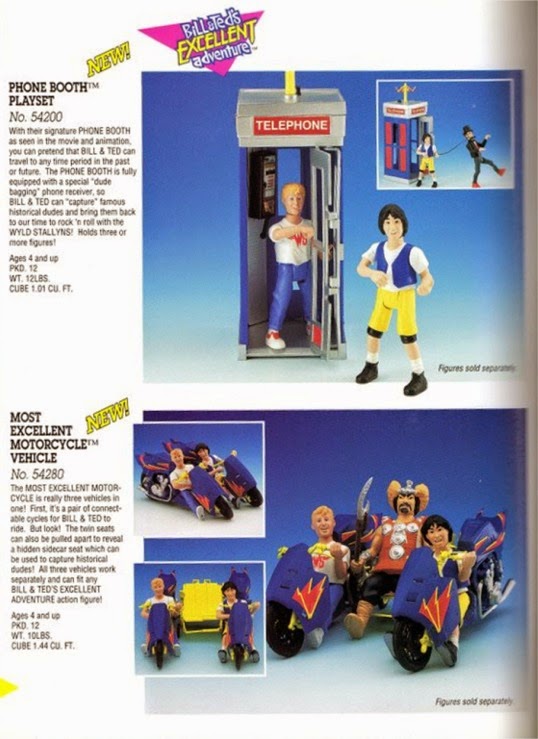 As well as cool figures this line also had some really awesome playsets, vehicles and accessories which really brought key elements of the movies to life. The phone both is the main key prop of the movie so it's no surprise that they made a toy of it. The phone box has a cable device which can yank action figures into the box in an instant. The motorcycles were cool as hell also. 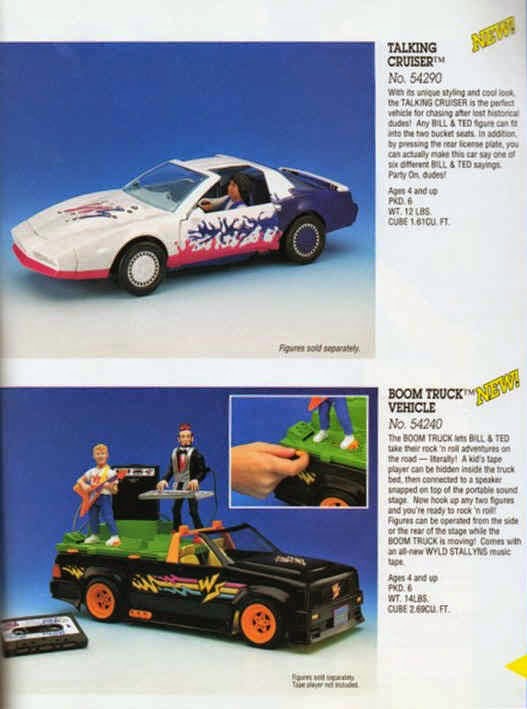 Two really awesome car accessories were released also. One was the two seater talking cruiser which played audio Bill and Ted quotes when you pressed the number plate. The second was the ultra amazing Boom Truck which had the band could actually had a mini stage at the back which the band could play music from while being driven around. 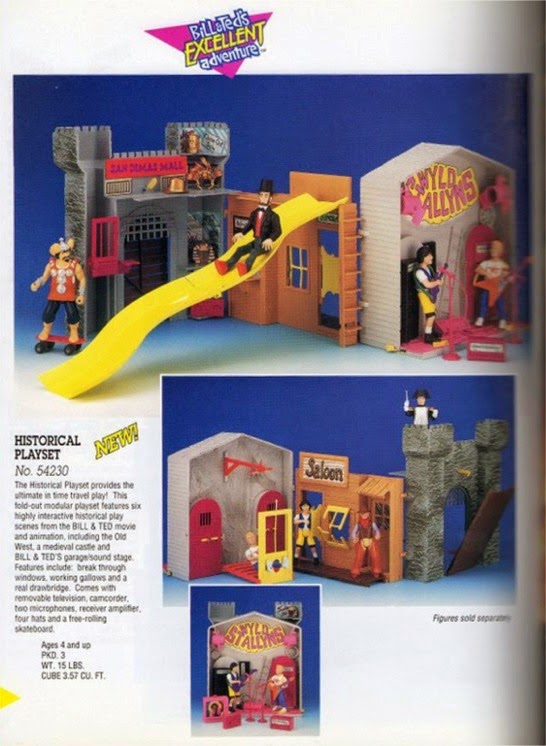 Finally we have the Bill and Ted Time Travel Playset which combined a few different movie environments under one toy. The toy included Bill and Teds Garage, a Med-evil castle and a wild west saloon. The toy had working gallows, a draw bridge and a slide.

Like most toys of licensed movies these toys did not have a very long shelf life at all and ended up in the bargain basements by the end of 1991 which is where I got most of mine from. Looking back, these were some freaking awesome toys that represented the movie and its universe extremely well. You can find these guys on ebay from time to time but they are very obscure. Some go for top dollar and others you can just get on the cheap in bulk sets of action figures.