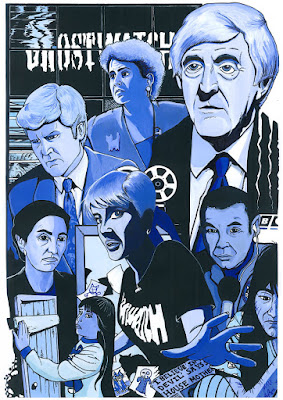 So here we have Ghostwatch, the innovative yet oh so controversial BBC drama which aired on BBC1 on Halloween night 1992.

Ghostwatch was a fourth wall breaking television program about a live investigation into a haunted house in the suburbs of North London. A mother and her two daughters have been plagued by violent poltergeist activity which is destroying their home and ultimately.. their family.

Each month UK residents scare them selves shitless with a BBC program titled Crimewatch. Crimewatch is a live phone in show which also features reconstructions of all the robberies and rapes which have happened in the last month or so. The show claims that it broadcasts this kind of thing to gain public information to solve crimes, but I believe the real reason is to scare people shitless with real life horror and to get ratings. 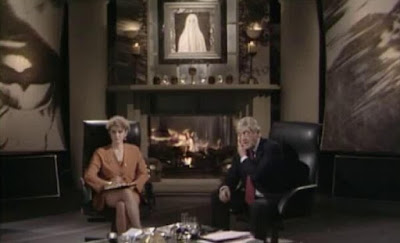 Using a similar formula Ghostwatch was filmed "live" from the BBC studios hosted by Michael Parkinson, Mike Smith and a paranormal investigator. Throughout the night they would take calls from the general public and go back to the cameras at the haunted house via satellite. 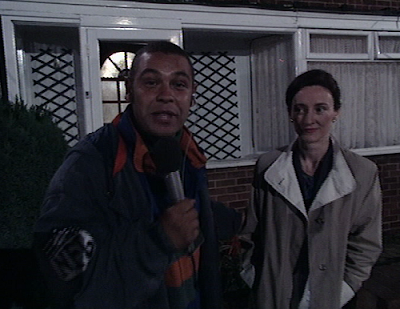 Back at the house we have everyone's favorite crack smoking space traveler Craig Charles and Sarah Greene from Blue Peter, in the trenches with the freaked out family. We are shown all of the gadgets and equipment for the first few minutes of the show. The team have all sorts of audio equipment, a BBC TV truck, cameras. temperature detectors and even thermal vision to make sure that the team don't miss a thing that may go bump in the night. 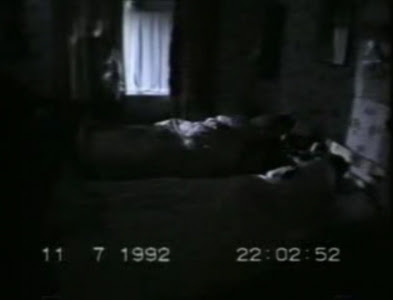 The show goes back and fourth from the house to the BBC studio, analyzing old footage shown at the top of the show where callers could phone in and report things they have seen during the course of the show. Back at the house one of the young girls shows Sarah Greene a boarded up door under the stairs where "Mr Pipes" lives. 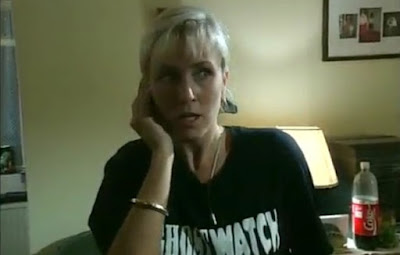 For the first hour or so is a series of fake scares and non events at the house. Things start to get quite horrific very quickly, with grotesque ghostly apparitions start to appear, lots of unnerving poltergeist activity and one of the young girls appears to have become possessed with cuts appearing all over her face. 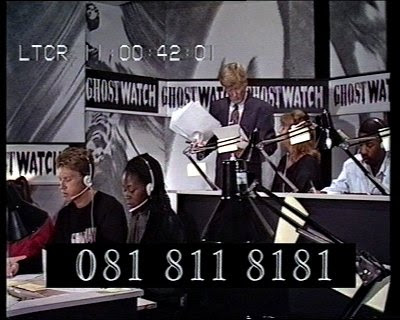 After lots of back and fourth from the house to the studio, to interviews with the locals, a caller calls into the studio with some horrific history about the house. Turns out Mr Pipes was a pedophile who lived in the house decades before, and committed suicide under the stairs due to being possessed him self by the ghost of a woman. From there the program takes us on an amazing ride of fear to an ultimate climax which left most of the country who watched it very fucked up to say the least. 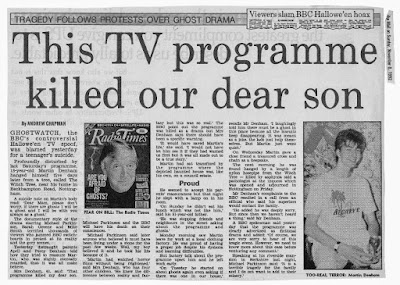 The public backlash and public outcry when the show went off the air, was one of the biggest in TV history. Although the program was a work of fiction a lot of people really got into it and took what they had just seen as actual fact. The makers of the show put up the general BBC hotline number throughout the show which played a recording telling them that the show was a work of fiction, but they could still share their thoughts on the paranormal. However due to the mass amount of people calling in the lines got jammed and no one could get through to hear the recording.

Another reason this show may have caused such confusion and terror was due to many people tuning in halfway through which also caused a lot of confusion as to wether the show was in fact drama or fiction?

The public outcry didn't stop there one family claimed their son had killed himself after watching the show and believing he can become a ghost. The BBC was inundated with calls and letters from people wanting blood from the shows creators for duping them into a sick Halloween hoax. I have always said that if you write into points of view or comment on more than one youtube video then you should be sentenced under the mental health act anyway so fuck them douche bags. I thought it was great, and as it goes I was upset that Sarah Greene didn't get fucked up and that Parky wasn't possessed by the ghost of a nonce in real life! 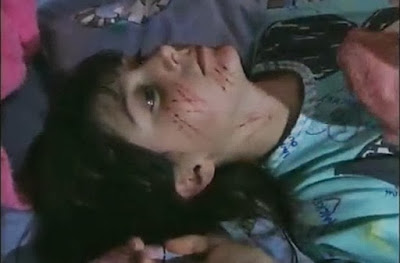 The main reason that Ghostwatch worked so well and affected so many was because of the fact it broke the fourth wall. Using real people we all know from TV, their real names and personalities, live feeds and of course the infamous phone number. Ghostwatch was filmed in such an innovative way that you couldn't help but believe it at the time, as nothing had been done before in this manner.

Although they used actors for the minor characters all of the BBC crew were people we all knew and trusted from TV and they played them selves which probably really freaked out anyone channel surfing at the time.

The makers of the show really got hammered and the BBC never repeated the show again and it is listed up there as one of the most controversial television programs of all time.

So did the creators intend to dupe the entire country into believing poltergeist activity was going on in their TV sets? Or was it an experimental drama which meant to cause no harm what so ever?

I believe that yes they wanted the reaction of people believing it was real but at the same time did not know the power of the piece of media they created. The show is designed to punch through the confines of BBC drama and put you there in the house with the horrific events happening at that very time "live" in the house. You have to remember that this was 1992 and horror was very much on its way out for a time. Everyone had become immune to the scares of the screen and most horror franchises were aimed towards young boys and teenagers. We all know that the best way to scare someone with a ghost story is to make it real. Ghost stories are made real with real locations and people. Having "live" footage in a house in North London instead of a Gothic castle or mansion really hit home with people watching at home.

So yes I do believe that the reaction the show makers got was the reaction they intended but I am very sure that the makers didn't want to cause any harm or make anyone take their own life. Being a writer and an artist my self I love creating scary creations and stories which really punch terror into the hearts of my target audience and you have to find new and innovative ways to do so. So in that position myself I would have done the exact same thing. 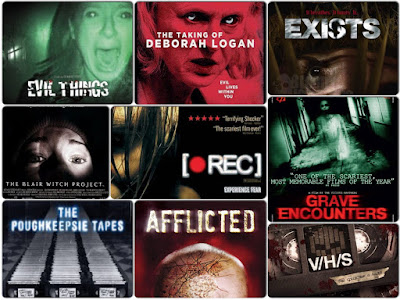 Years later Ghostwatch would inspire an endless list of "found footage" horror movies filmed with normal hand held cameras making the program very historically significant in the world of horror. The makers of the Blair Witch Project studied the show before making their own very ground breaking film which also got a public backlash for being a hoax and a very sick joke. I thought it kicked ass but most of the found footage movies apart from about 4 are complete dogshit poor. 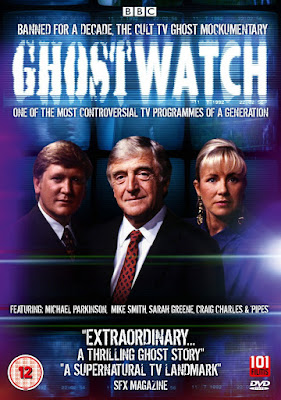 Ghostwatch was released on DVD some years ago and there are many versions of it online to stream. So if you want to really terrify everyone put this on at Halloween and say its real for ultimate effect.