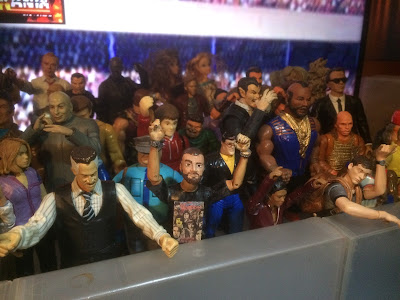 BY KRISTIAN RODRIGUEZ AKA K ROD

I have been many places and done many things, but I have never been to Wrestlemania. I have attended some of the greatest Wrestling shows that have happened in the U.K including Summerslam 92 at Wembley.

I have never been to Wrestlemania, the main reason is because of how expensive it is!

However I didn't let that phase me and I decided if I couldn't afford to go.. I was gonna make one of my own! My own Wrestlemania which could happen in what ever timeline I wanted and with all the superstars of my choosing.

No Roman Reigns, Dean Ambrose or any of them other vest wearing mediocre looking "superstars" of the current era. I fancied going back in time! To a time when the legends roamed the earth (late 80s early 90s to be specific)

So with my army of action figures, mini engineering/set building skills and average photography, I managed to create a dream Wrestlemania where my action figure could be in the front row. After doing a few practice runs with smaller sets and cards I went to work booking something truly awesome.

Here is the video of the entire event. Once I finished making this I came to the realization that

2. I could have gone to wrestlemania if I hadn't of spent all that money on action figures.. oh well!